Reporting and analyzing conflicts in Pakistan 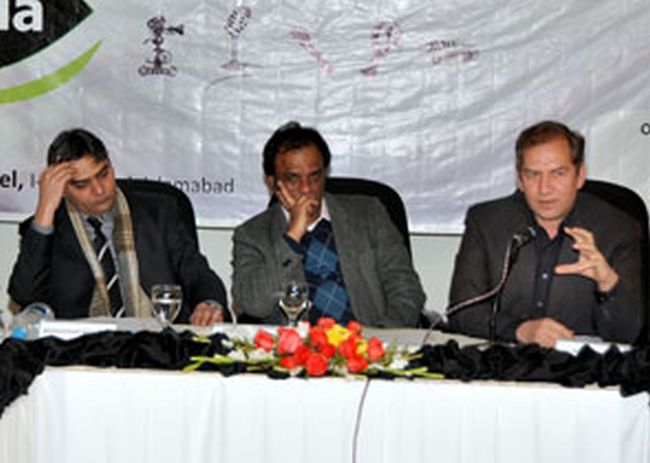 The information explosion has lifted the role of journalists from traditional story tellers to analytical and investigative reporters who have the professional capacity and abilities to think critically and link the available information to its larger political, socioeconomic and other related dimensions. The participating young and mid-career journalists were told in a media training workshop on ‘reporting and analyzing conflicts in Pakistan’ jointly organized by Pak Institute for Peace Studies (PIPS) and the Canadian High Commission on January 9, 2013 in Islamabad. More than 40 journalists from across Pakistan and others including media experts and researchers participated.

The workshop was the first of a series of four such workshops designed to train and enable Pakistan’s mainstream print and electronic media to accurately influence public opinion and also policymakers through their progressive and objective reporting and analysis of conflict and human rights issues. The first workshop was held on December 24, 2012.

Mubashir Bokhari, a veteran journalist and visiting faculty member at the School of Media and Mass Communication at the Beacon House National University, Lahore said that the safety and security of journalists reporting conflicts and crimes should largely be a responsibility of the media houses. He however advised the journalists to adopt some personal measures in case they received some threats such as: informing their families and organizations about their movement; providing in writing the information about the threat and source of threat to local police station, and national and international media support organizations; travelling carefully by frequently changing routes and transport, and without family; and establishing professional relationship with their sources of information instead of friendships or personal relationships.

Former director at Khyber News Hassan Khan explained to the journalists how they could adapt and cater to the demands of a transformed information market by learning critical thinking and analytical skills. He said a reporter should be able to critically evaluate the available information and its sources to assess their actuality, relevance, logical value and neutrality.

Senior journalist Ershad Mehmood was of the view that journalists should research and practice fact-checking to add to their professional coverage of conflict and balanced reporting, which are key to minimize threats to their lives. He said journalists could do so by establishing their personal database, fact files and by compiling and reading research articles on the area of conflict their cover.

Muhammad Amir Rana, a leading expert on issues of insecurity and conflicts in Pakistan, delivered his lecture on how journalists should report a conflict. His lecture was followed by an exercise session in which all the journalists were divided into five groups and each was tasked to report and analyze an assumed incident of violence. A penal of five professional editors later listened to group presentations and guided them accordingly.