Users can search the data on conflict, insecurity and violence using individual categories/ variables and advance/multiple search options.
To make it convenient for the user, the database team maintains daily-updated and diversified info tracks containing distribution of overall incidents of violence (attacks/clashes), targets of the terrorists, casualties, district-wise or regional distribution of terrorist attacks and consequent casualties, and attack tactics used in terrorist attacks.

The category of ‘Attacks’ in the menu bar means the number and distribution of overall attacks/clashes, or incidents of violence, for selected region(s) and during a specified time period. This major variable has following sub-variables: terrorist attacks (by militants, nationalist insurgents and sectarian groups); incidents of ethno-political violence; operational attacks by the security forces and their clashes with militants; cross-border attacks/clashes (Pak-Afghan, Pak-India and Pak-Iran borders); drone attacks; sectarian clashes; inter-tribal clashes; inter-militants clashes; and clashes between criminal gangs.

A search by ‘Targets’ will display only the targets hit by the militants, nationalist insurgents and sectarian groups in their terrorists attacks in a selected province/region and over a specified timeframe. If a province/region is not selected, the user will get the data on targets for all the regions by default.

‘District Reports’ display the number of terrorist attacks (including militant, nationalist insurgent and sectarian-related) in each district/agency of the selected province/region for a selected time period, consequent casualties and details of responsible group(s) and damages. If a province/region is not selected, the user will get the district reports for all the regions by default.

Search by ‘Tactics’ displays the frequency of different attack tactics used in terrorist (militant, nationalist insurgent and sectarian-related) attacks and other incidents of violence in a selected province/region during specified time duration. If a province/region is not selected, the user will get the data on attack tactics for all the provinces/regions by default.

The abbreviation used in the database for different attack tactics is listed below.
Table 2: Abbreviations used for Attack Tactics

Advance search options provide certain filters to refine the search to get the required data using different variables or individual categories such as date (time duration), location (province/region), type [of attack/clash] as described in individual category of ‘Attacks’, target(s) [of the terrorists], suspected organization behind attack/clash or claimant of responsibility and attack tactic(s).

Multiple search options provide further filters to get the required data display on one page using different variables described in advanced search and by selecting more than one options in each category by holding the ctrl key. 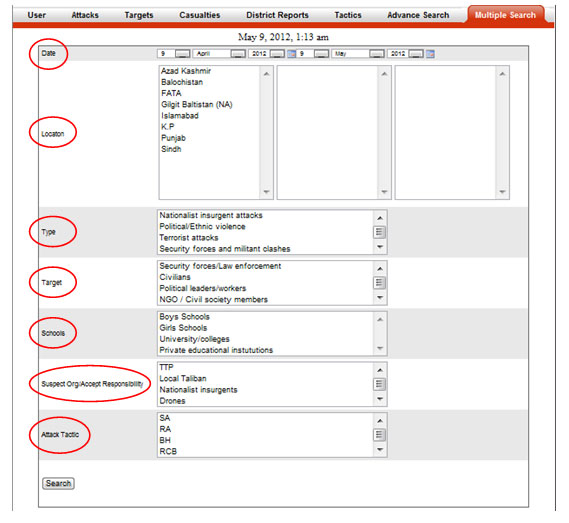 Outcome of each data search is displayed in form of tables and charts that can be seen and downloaded in PDF and MS word formats. An additional feature of PIPS database display reports (tables, charts and graphs) is use of pop up window and reference links to explain abbreviations, terms, related developments and citation of sources. 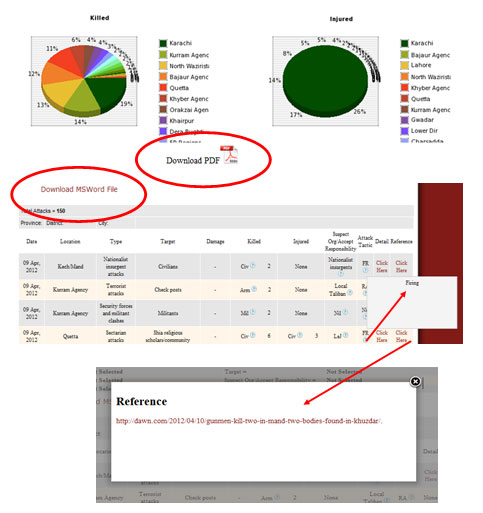