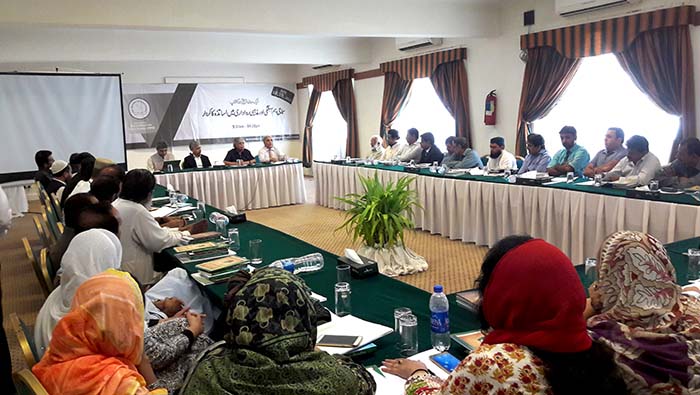 A teacher can help build tolerant society by inculcating in the students the habit of listening to each other, respecting diversity, and asking questions in a form and manner that does not show animosity.

These thoughts came in a discussion in a day-long workshop with over 40 teachers of post-graduate colleges of Sindh and Balochistan, organized by Pak Institute for Peace Studies (PIPS), on 19 July 2017, on the role of teachers in promoting social and religious harmony.

Columnist Khursheed Nadeem argued that because of extremist tendencies, people do not listen to each other. Instead, a growing tendency of dismissing each other has grown. Intolerance in the society is a direct reflection of that behavior. He called for respecting diversity.

Khalid Masud agreed, saying we need to tolerate each other’s point of view. He lamented that diversity of opinion is projected as bad. This, he said, is wrong. In reality, diversity has been a source of strength in Islamic tradition. Islam was accepted by people of different thoughts because of its appeal to wide segments of society. 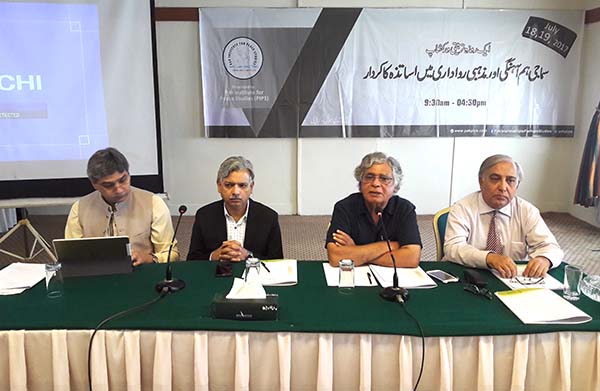 The role of a teacher to this end should be to build capacity of students to ask question and how to frame the question, as well as to how to find answer to that question. A teacher is meant to form a student intellectually, he said. It is for a teacher to summarize all the existing knowledge on a given subject, and then present one’s opinion, but letting students decide on their own which one is right. That is how knowledge develops and societies develop.

Academic Syed Jaffar Ahmed argued that for all the impediments that teachers face, when it comes to classroom, it is their domain. In a classroom, teachers have authority and responsibility. They should exercise this responsibility with prudence. He called upon teachers to uphold diversity, noting that the curriculum may have flaws such as in the shape of inculcating history through a certain identity framework, that of religion. 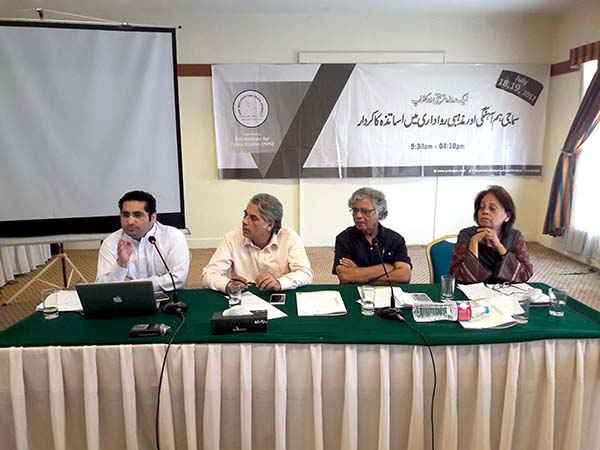 Ghazi Salahuddin, senior journalist and columnist, while agreeing that there are problems faced by teachers, reminded that the best any person can do is read on its own. “No one stops you from reading”, he noted upon participants. He called for inculcating reading culture.

Academic Khalida Ghaus shared that teachers, especially of social sciences, are not accorded the treatment they deserve. Social sciences open multiple perspectives and frameworks, which are missing from the discourse.

Romana Bashir, presenting the case of non-Muslims in Pakistan, wondered why non-Muslims are kept out of the political processes; non-Muslims can for instance not become head of the state of the country, she said. Yet, she noted, there are several clauses that accord equal citizenship to the non-Muslims, though on ground, they end up being discriminated.

She grilled a “certain mindset” that stereotypes against non-Muslims, thinking of them as doing menial jobs only. Even in the so-called educated one, she shared experiences of meeting people who bracket non-Muslims with foreigners.

Meanwhile, journalist Sabookh Syed touched upon the importance of social media towards social harmony. He quoted examples of how social media radicalized or provoked people – the most recent one being of the self-radicalized individuals.

One such person, a woman, was leaving for Syria, yet her father, himself a teacher, did not know that. Because teachers, like parents, are not much aware of social media, they are unable to understand the emerging trends and how to effectively deal with young generation.

Similarly, people often fall for wrong news circulated on social media. So much so that even fake fatwas have been circulated around, which people take for right, he said. Only those with knowledge can counter disinformation.

Participants called for sensitizing teachers on social media tools so that they ensure their students do not fall prey at wrong hands.

Senior journalist Mubashir Zaidi told teachers that as builders of the nation, they should inform students about their rights. He asked if many people, teachers included, know about the constitutional rights granted to them. He suggested that teachers should learn the basic chapters on the rights and inculcate that to students.

Earlier, Amir Rana, director PIPS, argued social harmony is the need of today’s globalized world, where majority in one area is minority in another area. He shared the purpose is not to revisit any social contract but to rethink about our behavioural changes.

PIPS’s Project Manager Muhammad Ismail Khan presented overview of how to counter extremism in Pakistan, a policy document evolved out of series of consultations with experts on the subjects. The document calls for respecting diversity in the country. Teachers can uphold that diversity in the classroom by sharing multiple views and respecting students of all background, the document noted.