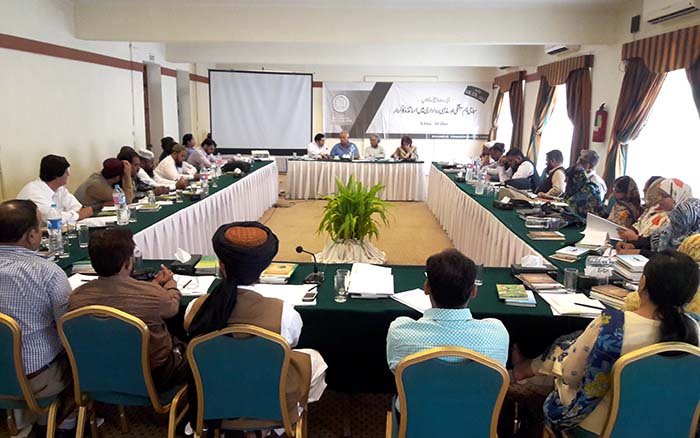 Teachers are duty-bound to open multiple vistas to students. They should disassociate their understanding of the world to a single identity, whether ethnic, religious or sectarian. Instead, they should impart students with multiple views, enabling them to think openly.

These thoughts came in a discussion in a day-long workshop with around 37 teachers of post-graduate colleges of Sindh and Balochistan, organized by Pak Institute for Peace Studies (PIPS). The discussion explored the role of teachers in promoting social and religious harmony. 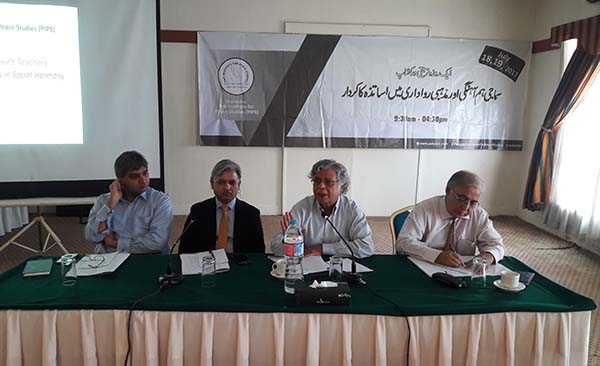 Starting the discussion, Khursheed Nadeem, a renowned columnist and TV anchor, argued extremist tendencies are evident in the behaviour of the people. The environments of formal education and social learning are among the key factors responsible for extremist and regressive behaviours. He argued several people are stuck with several starting points and understanding of historical events, not ready to accommodate or listen to the other. This results in widening differences.

Yet he noted there have been some efforts to revisit our behaviour, largely after the extremist waves engulfed the country.  Now that our own intolerant attitudes are at squeezing the very space for us, he said, the state and society are thinking how to correct the behaviour. This, he said, is one positive element, which should be capitalized including through education.

Academic Syed Jaffar Ahmed explored link between curriculum and teacher. Both have a mutual relation. Even with a flawed curriculum, it was argued, teachers can help sensitize students. He called upon teachers to detach from “nationalistic framework”, recommending that students to be taught how to think like an independent person. 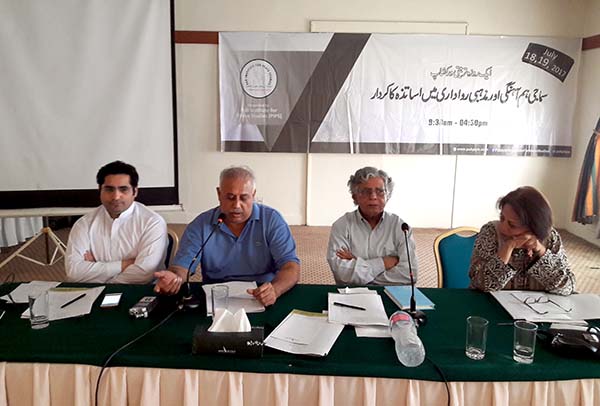 Jaffar Ahmed said while there are exhaustive courses for military officers and civilian bureaucrats, from one scale to another, there are none for the teachers. He called for imparting trainings to teachers.

Ghazi Salahuddin, senior journalist and columnist, shared many universities even lack history departments. Without historical correctness, it is not possible to learn from each other, to be open to multiple views. Academic Khalida Ghaus agreed, sharing that, she came to know from her experience on key posts in education sector, that the entire social sciences are ignored.

Meanwhile, peace building activist Romana Bashir called for rights to all citizens, irrespective of their backgrounds. She said the founder of Pakistan too talked about equality, saying religion will be personal issue of the people. She called for implementing the constitutional clauses which imparts equality to minorities, referring to the Supreme Court’s judgment of 19 June 2014 to this end.

Syed Ahmed Banori of Jamia Uloom Islamia Allama called for respecting each other’s views and teaching students how to ask questions. He warned teachers against assuming that they have all the knowledge, advising them to continue with their quest of inquiry. 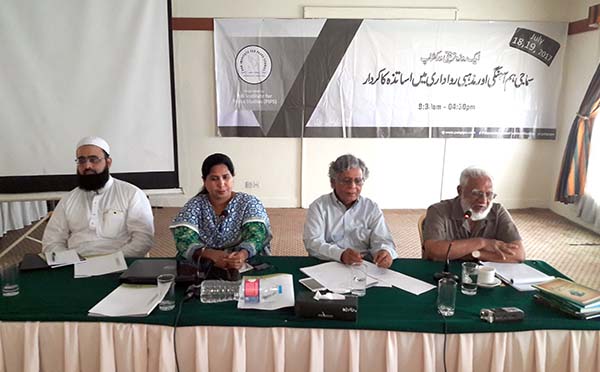 Participants blamed media for not according teachers their due role and sensitizing differences. One participant called for sharing commonalities.

Senior columnist Wusutullah Khan, agreed but touched upon media’s own internal dynamics. He stressed upon promoting reading culture, saying we are ready to spend money on trivial things but complain about the prices of books.

Meanwhile, journalist Sabookh Syed summarized the importance of social media in promoting or blocking social harmony. He shared examples of how social media inflamed emotions, with some people even joining radical groups. He called upon teachers to learn the use of social media, which has both good and bad usages.

Muhammad Amir Rana, director PIPS, argued social harmony is the need of today’s globalized world, where majority in one region is minority in another region. The key question, he said, is how can we engage with our diverse community? These questions are asked by a broad spectrum of intellectuals in the Muslim world, including in the Islamic publications printed in Pakistan.

Earlier, PIPS’s Senior Project Manager Muhammad Ismail Khan shared overview of the national strategy of countering violent extremism in Pakistan, prepared by PIPS. The strategy underlines that upholding diversity is key to a secure Pakistan. This diversity should be upheld in all policies and platforms, ranging from parliament to classroom.