EventsIslamabadPakistanTeachers' Engagement
By PIPS Published On May 16, 2017 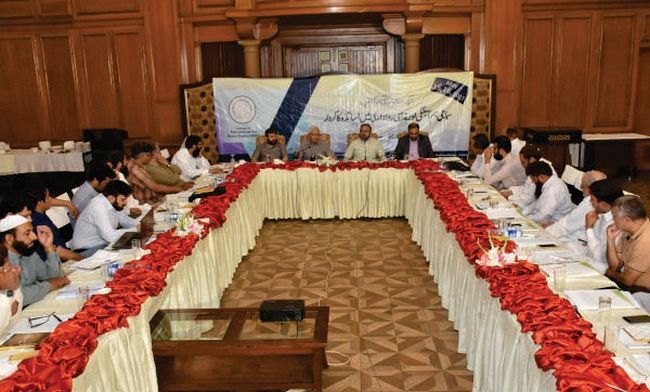 PIPS workshop with teachers and educationists-I

Teachers shape societies; a good teacher should be receptive to inclusive opinions. But teachers, influenced by one or other political consideration, end up distorting society, towards parochialism.

This was shared in the one-day training program on “The role of teachers in social and religious harmony”, arranged by Pak Institute for peace studies (PIPS) in Lahore on May 16th, 2017, attended by more than thirty (30) teachers of government-run post graduate and degree colleges of central Punjab attended.

Qazi Javed, Director, Institute of Islamic Culture Lahore, argued that teachers can help change contemporary societies towards betterment. “Teachers have to play their role in changing our society [in instilling peaceful values], notwithstanding the fact that our history books are full of events glorifying wars and hatred”, explored Mr. Javed.

Mr. Javed added that world has shown immense progress in the fields of science and technology during the past fifty and sixty years, but overall its impact over the betterment of society remained minimum, “Extremism in different parts of world excelled in past few decades but standard of life didn’t improve”. Mr Javed linked the decline of world towards poverty and crime to education, as it didn’t play its due role.

Ammar Khan Nasir, religious scholar at Al-Shariah Academy, Gujranwala, underscored while it is easy to pinpoint drawbacks of teachers in contemporary societies, it is important to know the differences between contemporary education and previous systems. “Previously, the criteria of a teacher included ethical grounds; today this trend has been overtaken by political influence”, said Mr Nasir.

He further elaborated that main trends of behaviours including anger, hopelessness and hatred are generally prevailing in the society, and unfortunately, these trends are also observed in teachers too, “Today we lack polished teachers and this is the flaw of our existing system”, Mr. Nasir said.

Dr Shahbaz Manj, Professor Sargodha University, argued that bringing balance in religious and social sentiments is the most important requirement of today’s age. “This was the reason our Prophet (Peace be Upon Him) focused on these two aspects particularly”, said Dr Shahbaz.

He further went on to say that the holy book Quran teaches not to allow emotions overcome conscious. “Interestingly we are not conforming our religious texts to contemporary era and what we taught in educational system is very different from current era’s requirements”. He added that “diversity is beauty of the nature and we have to accept it,” added Dr Shahbaz. Sectarian harmony could be achieved when society in general and teachers in particular start thinking beyond the thresholds of sectarian ideologies.

Maulana Amanat Rasool, Principal, Jamia Naeemai Lahore, urged that existing educational system has led to the creation of classes in our society. “Overall secular educational system has been ruining the society, as it produces individuals highly divided into class; one class has to rule, second, to serve, and third, to labour”, said Maulana Rasool.

Dr. Amir Abdullah, Secretary General Al-Maward Institute, Lahore, was of point of view that around 90% recruitments to terrorist organizations, today, are made online. “Only state can put a stop to this mechanism. On other hand, if an individual or a child is reeling towards isolation, their teachers and parents have to play their due roles in bringing him back to normal life, and not the state”, said Dr Abdullah.

Hussain Naqqi, former director Human Rights Commission of Pakistan, Lahore, while highlighting the plight of minorities in Pakistan, asked that while the subject of Islamic Studies has been added in the curriculum of Muslim students since long, is there any similar provisions for non-Muslims? “Our curriculum compels non-Muslims to read and study Islamic Studies besides teaching them how to offer Muslim prayers”, said Mr Naqqi.

According to Naqi, there is not a single non-Muslim member in the group designing ethics books for non-Muslims in Pakistan. “Teachers in classrooms make fun of non-Muslims and, if they want to do research over their religion, then how many libraries do we have for them in our country?”, Naqi queried. He further said that there seems to be confusion on the definition of Muslim since the creation of Pakistan. This is reflected in our educational institutions too.