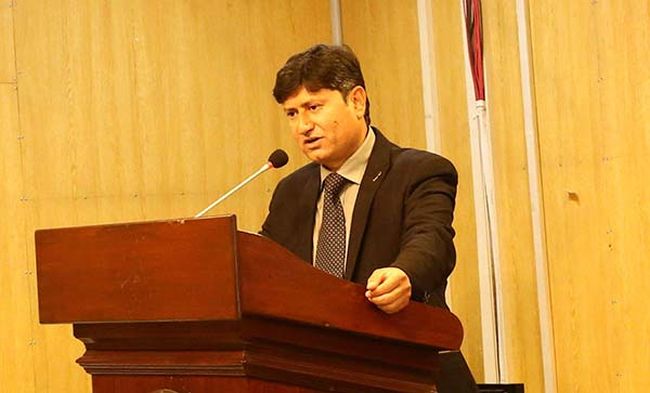 Before the workshop started, the “Code of Ethics for Pakistani Media” was distributed in the press clubs. Posters of the code, English as well as Urdu, were pasted in the various vicinities of the clubs, especially walls. Participants were given special diaries and stickers marked with precepts of the Code.

Introducing the Code, moderator Sajjad Azhar argued that a great urge has been felt for a proper code of ethics for media ever since the advent of electronic media in early 2000s. Today, he said, there are dozens of channels and newspapers, but not a single code accepted by all.

It is not that journalists are dismissive of codes for their professions, he cautioned. The codes for print media are somewhat accepted. The challenge comes from the electronic media; even the mandate of its regulator, Pakistan Electronic Media Regulatory Authority (PEMRA) is contested.

A fresh code has become a necessity to assure the sanctity of the news, as questions are raised on their training and fear is expressed about their security.

One attempt to shape a consensus-backed code of ethics has been made by Pakistan Coalition for Ethical Journalism (PCEJ), a watchdog inclusive of civil society organizations and journalists. After consulting around 1477 people, the coalition’s partner has come up with a holistic “Code of Ethics for Pakistani Media”. The workshops were meant to disseminate that Code.

A documentary on Code of Ethics was also played at each workshop, narrating the story of a cameraman who lost his life in the line of duty, a life which could have been saved, had some restraining code been put in place. 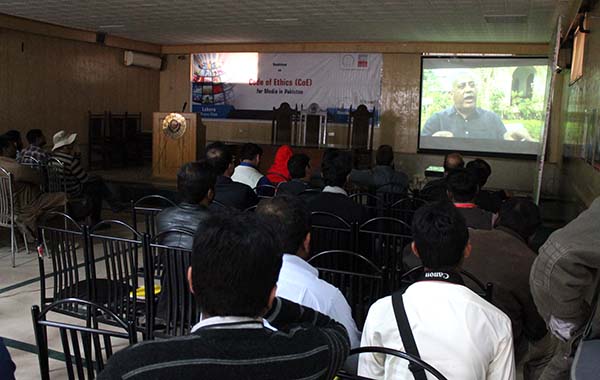 Several participants at these workshops argued that professional journalism will help secure the lives of journalists too.

Anchor Khyber TV Aqeel Yusufzai said that because media outlets lack resources, bright people do not turn up to the field. In the process, media is presented as a product. Those who kill journalists do not consider the profession as sacred, any longer.

President of Pakistan Federal Union of Journalists, Afzal Butt, also argued that because journalists too are not trained on reporting about conflict issues, fall themselves preys to those conflicts. If the Code is implemented, lives of journalists can be secured and their professional standard can be improved.

The Code will help journalists to cover with safety, it was hoped. Speakers in Quetta included president of the Press Club, Shahzada Zulfiqar; bureau chief of Dawn News, Saleem Shahid; and director PIPS, Muhammad Amir Rana.

In Peshawar, Alamgir Khan claimed that media headquarters in Karachi and Lahore are uninformed of the situation in Peshawar, putting pressure on the journalists of the town, often with utter disregard to their lives.

Speakers also called upon media to look inwards. Instead of pointing fingers at others alone, media should start with reforming itself. President of National Press Club, Shakeel Anjum said while media tend to tell everyone about regulation, it lacks its own regulation.

Journalist Azaz Syed, in Karachi, said the detailed Code shows that today’s media do not follow codes. If that were not so, there would have been no need of the Code, at all. Even big media outlets do not follow code of ethics, what to talk of smaller organizations, he said.

From Lahore, Shahbaz Mian, President, Lahore Press Club, said it is lamentable that journalists think they should [only] go out of their city for media training workshop, taking training as some sort of outing. The reason for this owes to the insular environment in media houses.

He saw uncertainty in media houses. Even labour laws do not apply on them, because those laws revolve around print media. He argued that the proliferation of news channels and newspapers end up oppressing journalists.

A journalist in Peshawar claimed that even the financial conditions of journalists in Peshawar are bad, as many are still unpaid.

Speakers also blamed commercialism for intruding into journalism. One of the specific points was of watching media owners. In Peshawar, Alamgir Khan rather shifted the blame from media on to the owners, recommending that a code of ethics be also shaped and enforced upon all media houses.

Bureau chief of Dawn, Ismail Khan, said that the advent of electronic media has made useless the existing codes of media. Journalists of today lack resources and training; worst of all, they are pressurized by owners and state. “Quality journalism is on the decline”, he said.

Lahore’s Shahbaz Mian feared that the space for working journalist is shrinking in media. They face different pressures. They should be appreciated for what they are producing in such tough circumstances.

Participants applauded PIPS for disseminating the Code of Ethics.

In Islamabad, President of National Press Club, Shakeel Anjum appreciated the Code of Ethics, saying the work done by PCEJ should have been done by the journalists. He said this work should not be put on the backburner, but owned, because of the involvement of journalists. That is why this Code should be enforced in all media houses.

In Karachi, President of Karachi Press Club, Siraj Ahmed, said the Code has been asking for accurate reporting.

Afzal Butt shared that while a Code of Pakistan for Federation Union of Journalists (PFUJ) already exists, this new Code is drafted in line with new needs.

Senior anchor of Dawn News, Mubashir Zaidi, in Karachi, said the present code of conduct of the PFUJ does not apply to electronic media, leaving them unanswerable to anyone. While in the west, the news agenda is decided by the newspaper, here, the electronic media decides the agenda to be followed by newspapers.

Questioning if the code will be properly implemented, he shared we live in a country where people do not even accept law. Participants called for implementing the Code to its spirit.

Shahbaz Mian called for launching a campaign on the basis of the Code of Ethics. This campaign can be launched on social media, so that every working journalist of Pakistan knows about his or her rights and responsibilities.

The five workshops, called roadshows, were conducted in the following order: