On 25 May 2017, PIPS hosted “Inclusive and Secure Pakistan” seminar, releasing a national policy report on how to counter violent extremism in Pakistan, and discussing debate on the content of that document.

Participants of the seminar urged upon the parliamentarians to help confront the issue by instilling a fresh narrative, overseeing policies impacting internal peace, tightening rules and procedures of extremist-fighting bodies, and above all holding debates on the causes and remedies of extremism.

The National Strategy of Inclusive Pakistan, which PIPS launched at the seminar, is the first-ever countering-violent extremism. It suggests a policy framework of secure and cohesive Pakistan.

Chair of the seminar, Senator Raja Zafarul Haq, who is leader of the House in Senate, appreciated the effort of consolidating findings on countering extremism. He vowed to bring a resolution in the Senate to constitute “committee of the whole” to address the issue of extremism confronting the country. 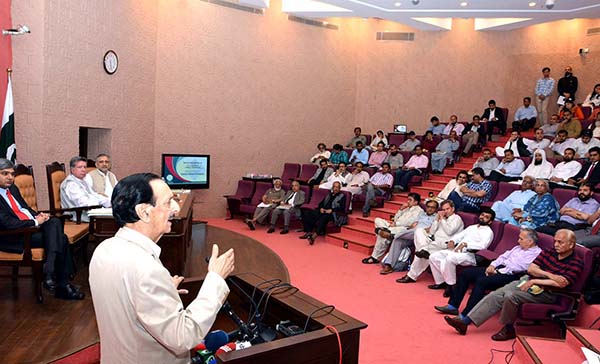 The strategy document is based on the work PIPS has been doing over the years, coupled with the input provided in the ten (10) national-level expert consultations on countering violent extremism. The consultations were held on a range of entry points, which PIPS believes, if explored, can counter extremism.

Columnist Ghazi Salahuddin, a member of such groups, pointed towards intellectual dearth in the country, due to which extremist ideas go unchallenged. He shared figures on the little knowledge-producing bodies in the entire Muslim world.
Senior journalist Muhammad Ziauddin observed that good governance can deter militancy from producing in the first place. He noted that Pakistan’s education sector is to be blamed too, which was injected with narrow worldview since the 1980s.

Meanwhile, former senator Afrasiab Khattak claimed that ISIS is an emerging phenomenon which should be taken seriously. While its strength in the Middle East is weakening, its offices are getting opened in FATA.

The “National Strategy of Inclusive Pakistan” also notes how militancy revolves around exclusion, it was shared. Extremists not only attack non-Muslims, a marginalized group but also thrive in excluded territories like the tribal areas. This should be explored and addressed.

Senator Farhatullah Babar called upon the government to look at the “exclusivity” of these areas. He wondered why the process of mainstreaming FATA was stopped, asking the government to immediately mainstream the area, as committed. He argued that while intellectual responses are contingent on freedom of expression, this freedom is curtailed on the pretext of national security.

One of the key findings of the report has been to uphold pluralism, in the shape of local cultures. Dr. Fauzia Saeed, Executive Director, Lok Virsa, said that local cultures should be appreciated, and their festivals be celebrated.

The CVE strategy, it was noted, should comprise of soft approaches, which takes into account measures that tackle extremism in the long run. As of now, most of the measures are reactive and knee-jerk.

Founding head of NACTA, Tariq Parvez, said that when it comes to National Action Plan, much of the progress has been military-driven, involving military or paramilitary forces. Echoing with the report, he called for empowering police to take lead on counter terrorism.

The groups noted that fighting militants on the ground is as important as neutralizing them without necessarily pick up fight, such as by reintegrating them after meeting certain conditions.

Dr. Jaffar Ahmed, Karachi University, argued that for all the intellectual debates aimed at ridding Pakistan of extremism, there has been a consensus Pakistan’s Constitution should be the main source of theoretical and operational guidance. Dr. Khalid Masud, former Chairman of Council of Islamic Ideology, said the 1973 Constitution was an important step towards inclusive Pakistan.

Taking part in the discussion, Senator Jehanzib Jamaldini even called for revisiting the entire state-society structure, as the entire society has become radicalized. “Our society”, he said, “still has soft corner” for the extremists. He argued that while we taunt India for not being secular enough, we shy away even from discussing secularism.

Meanwhile, journalist Saleem Safi noted that extremism is multi-dimensional in character; while there has been a lot of focus on one or the other component, like ideological, the issue of extremism has not been approached in its entirety.

Adviser to the Prime Minister Zafarullah Khan assured the participants that the government understands the gravity of the problem and has been brainstorming about it. 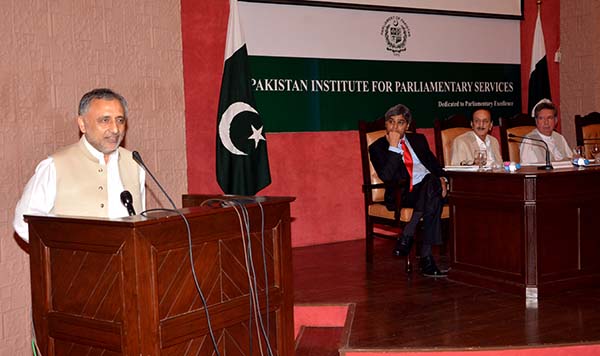 Earlier, introducing the report, PIPS’s director Muhammad Amir Rana, observed that violent extremism in Pakistan is a multi-dimensional phenomenon, permeates across different segments. And because extremism has permeated in different sections of society, the antidote lies in treating counter-extremism as a cross-cutting issue, to be reflected in all policies and actions.

Sharing findings of the report, PIPS’s Project Manager, Ismail Khan, noted that the road to security in Pakistan lies in diversity. Pakistan is diverse country, with diverse group of people, having diverse opinions; escape from the diversity is inescapable.