EventsRegional and global security
By PIPS Published On Feb 5, 2019 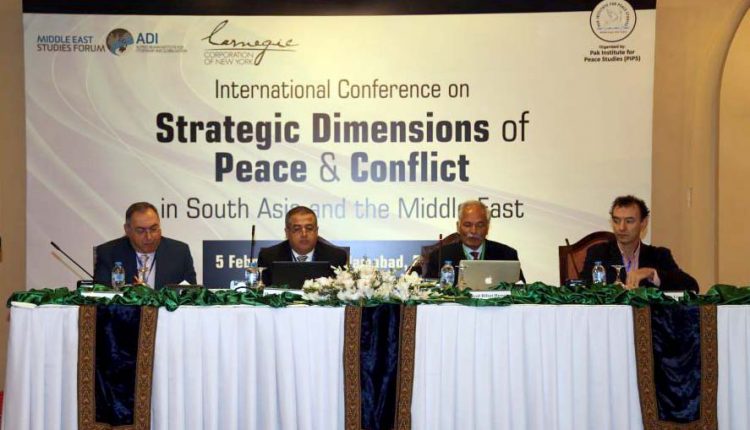 On February 5, 2019, a one-day international seminar on “Strategic Dimensions of Peace and Conflict in South Asia and the Middle East”, participated by prominent national and international scholars, was organized by PIPS.

Starting off, Prof. Shahram Akbarzadeh, Deakin University Melbourne, gave preliminary introduction of the topic. He argued there is literature gap when it comes to understanding proxy conflicts, and emphasized the significance of empirical data on the subject so as to suggest ways to mitigate conflicts in the region.

Muhammad Amir Rana, Director Pak Institute for Peace Studies (PIPS), in introductory remarks, said geopolitical scenario of the world is changing. Not only are violent elements categorized as a non-state actor but international institutions advancing human rights are also included in this category. 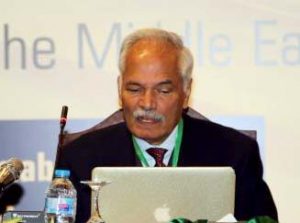 Prof. Syed Rifat Hussain, Department of Government and Public Policy, NUST, said the term “proxy war” is a contested notion.  There is neither any universal agreement on its definition nor on the set of circumstances producing it.

At the same time, he noted, proxy wars are as old as the phenomena of war itself. They are the instruments or state power; they enable state project their power.  It is a certain form of war which has continued for ages. He hinted at the linkage of external elements behind proxy wars. One of the definitions he shared was of “indirect engagement in a conflict by third parties wishing to influence its strategic outcome.”

The four key ways in which such wars are supported are by: providing arms and military assistance; assisting financially; supporting politically or diplomatically. Proxy wars either change the status quo or advance them further, he said of the purposef proxy war. He quoted US President Dwight D. Eisenhower on proxy wars as “the cheapest insurance in the world.”

At the same time, it difficult to blame the actual enemy, he said. For instance, involvement of Mukti Bahini in East Pakistan during 1971 war, influence of Liberation Tigers of Tamil Eelam(LTTE) in Sri Lanka.

Over the years, he said, the pattern of war has changed from less interstate conflicts to more non-state actors’ involvement. At the same time, he noted, the tit-for-tat tactics have blunted the appeal of proxy warfare. Global networks of communication and intelligence have rendered proxy war not only problematic but turned into a “wicked problem”, he added.

Dr. Ibrahim Fraihat from the Doha Institute of Graduate Studies termed proxy war as an arms conflict between two parties, where one party fights on behalf of another. That another party is not directly involved this way. He illustrated the example of Iran supporting Hizbullah as an example of proxy war.

He argued because of intervention by external power (such as through proxy wars), domestic conflicts get escalate. At the same time, he noted, proxy war can take the form of traditional wars. The best case is of Vietnam War, in which initially only 24 US advisors entered but after two decades, 58 thousand US soldiers had entered.

He said in the contemporary Middle East, many external players are involved, who have changed the region into a stock market of proxies.

William Gueraiche, Associate Professor at the American University in the Emirates, Dubai, underlined “multiplication of situations” – the variation in proxy wars from one state, one conflict to another.

He said on surface, all states boast of open diplomacy and multilateralism. Yet foreign interventions continue too, especially in the Middle East. In fragmented state, that is failed states, war is always an opportunity for the underdogs (and their patrons) to gain more power, he said. He said that while all states claim peace, no state will renounce its interests for the sake of peace.

Dr. Marwan Kablan, Director Policy Analysis at the Arab Center for Research and Policy Studies Doha, hinted at the involvement of multiple actors in Syrian conflict, which he termed as the “mother” of all conflicts in the region.

On proxy-patron relations, he said it is a two-way process that is not constant and continues to evolve with time. To resolve such warfare, he said, we need to understand what is at stake for actors, patron and proxy. “War cannot be ended unless patron states achieve their interests”, he said.

Dr. Shaheen Akhtaer, Professor at the National Defence University, Islamabad, focused on the dynamics of conflict in Afghanistan, saying Pakistan is apprehensive of India’s involvement in Afghanistan.

Such apprehensions can be better understood through the prism of Regional Security Complex in which Afghanistan forms the “mini complex” and is overshadowed by larger regional security dynamics. Islamabad’s uneasy relationship with Kabul, she said, reinforces a perception of encirclement, while a growing US-India strategic cooperation further aggravates these apprehensions. A stable Afghanistan is only possible if India-Pakistan relations take a positive turn, she said. 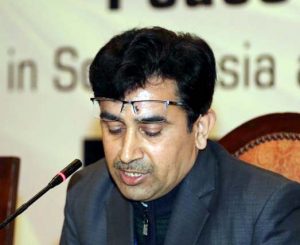 Dr. Muhammad Riaz Shad, National University of Modern Languages (NUML) Islamabad, said fighting through proxies gives states an opportunity of “deniability”. They can then avoid or limit the risk of direct confrontation and the consequent escalation and possible nuclear clash.

He further underlined US-Russia involvement in proxy wars in region. US-Russia engagement in Syria and Afghanistan are the two foremost cases of major powers’ involvement in proxy wars in recent years. It became the most important foreign policy tool of the US and the Soviet Union during the Cold War. Other prominent examples included the Korean War, Vietnam War and Afghan War.

Dr. Dara Conduit, Deakin University Melbourne, said interplay between ideology, soft power and national security considerations result in supporting proxies. It was added that state’s interests in presenting themselves as benign and non-threatened can be achieved by expanding cultural links. Bollywood has helped Indian standing in neighbouring states, especially in Central Asia. Soft power is a central ingredient of foreign policy for global and regional powers.

She said states justify their interference on ideological grounds. This justification has great appeal, even though the real motives are often entwined with calculation of power and security. She added that pursuing proxy relations tend to erode soft power, resulting in security threat. The short-term gain leads to long term losses, she noted.

Dr. Shabana Fayaz from the Quaid-e-Azam University, Islamabad, aggrieved that violent non-state actors have become a persistent challenge to nation-states in the 21st century. States needs to institute pro-active and holistic national security policy and foster mutual understanding with its neighbours to effectively deal with the threat of violent non state actors at all levels.