Progressive reporting and analysis can change skewed perceptions of a conflict

EventsMedia for peacePakistan
By PIPS Published On Feb 2, 2015 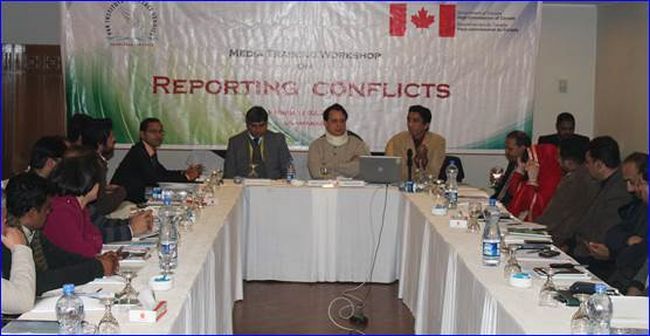 While journalists have the power to change narratives on conflict and influence public opinion, in Pakistan they lack the required capacity and professional training to develop progressive approaches to analyze and report conflicts. Besides practicing fundamental skills of journalism such as impartiality, accuracy, balance and ethics of investigation, journalists reporting conflicts should also develop skills of critical thinking and understanding of the dynamics of conflicts as well as learn the ways to manage threats in the field. These views were expressed by speakers of a media training workshop on “Reporting Conflict -1” organized by Pak Institute for Peace Studies in collaboration with the High Commission of Canada in Islamabad on February 2, 2015.

The workshop entailed three sessions: concept of conflict-sensitive reporting and practices in Pakistan; capacity issues in reporting conflicts; and how to report an incident of terrorism. Around 40 journalists from across Pakistan participated who were trained on different aspects of conflict reporting through lectures by and interactive sessions with prominent journalists and experts including Iqbal Khattak, Azaz Syed, Zia Ur Rehman, Muhammad Amir Rana and Rana Jawad.

Muhammad Amir Rana, director of Pak Institute for Peace Studies said the environment in which Pakistani journalists have to operate while reporting a conflict puts their security and safety at risk, which in a way also hinders their access to sources of information. He said while highlighting certain capacity issues that even if journalists are aware of the concept of conflict reporting they feel difficult to practice it mainly due to lack of professional training and threats in the field.

Senior journalist Iqbal Khattak also noted that reporting a conflict is very risky practice and poses serious threats to the lives of reporters, particularly in areas where the conflicts are deeply entrenched. He said many journalists are suffering from different mental and psychological disorders due to reporting incidents of terrorism who should be not only provided adequate trauma counseling but also psychological training on how to deal with such situations.

Azaz Syed, senior reporter at GEO TV underscored why it was important for reporters to understand different types of conflicts existing in Pakistan. Understanding a conflict and associated factors and actors was not only important to report it properly but also to ensure personal security and safety, he noted. However he was of the view that existence of various conflicts in Pakistan with political, sectarian, ethnic, and religious undercurrents compounds the challenges facing journalists. He said although with trainings and safety measures risks could be reduced but 100 percent security could not be provided to journalists in conflict-hit areas.

Zia Ur Rehman, senior journalist and the author of “Karachi in Turmoil” said the journalists reporting conflicts across Pakistan have huge capacity issues, especially in Karachi, Balochistan and the Federally Administered Tribal Areas. He was of the view that the capacity issues in reporting and analyzing conflicts are so serious that they have failed the majority journalists in performing their professional jobs. Not only should the reporters on the ground but the people who are working in the newsroom also be properly trained, he said.

Rana Jawad, bureau chief at GEO TV, Islamabad said reporting conflicts with journalistic ethics, consistency and professionalism in Pakistan is a hard task to ask. Journalism is a respected discipline and journalists have the power to change the narratives and minds of the people. Therefore, the role of journalists is very crucial in conflict reporting. He said journalists are facing the wrath of both the state and the non-state actors while reporting conflicts. However, there is an urgent need for journalists to be professionally trained.