“Teachers should learn how to engage with students of diverse faiths” 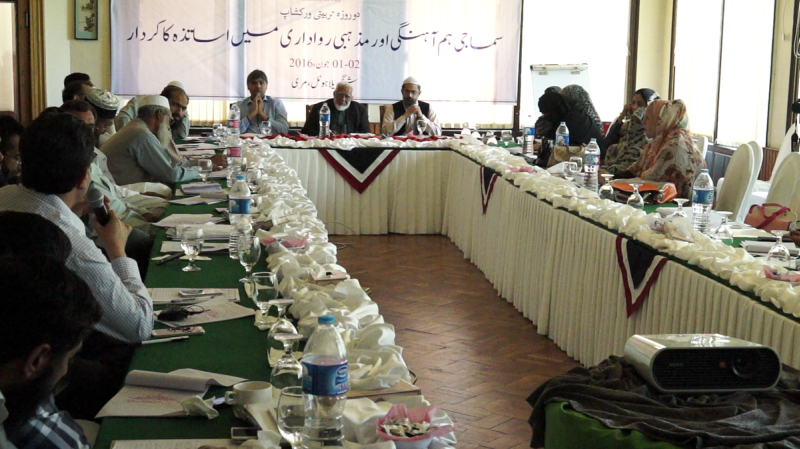 PIPS workshop with teachers and educationists-III

One of the central challenges to teachers of Islamic studies is how to engage with the diversity around them. Curriculum with questionable content, for sure, is one thing, but equally important is for teachers to learn and practice the ways to engage and sensitively reach out to students from diverse faiths.

These thoughts came in a two-day training workshop titled “Role of teachers in improving social cohesion and religious harmony” organized by Pak Institute for Peace Studies, on June 1-2, 2016 in Murree. Around 31 teachers, mostly from Islamic studies departments at higher-level institutes, from Punjab, Azad Kashmir, and Gilgit-Baltistan, attended the training. The workshop-cum-dialogue was third and final in a series of such events, which have been designed to promote tolerant and inclusive educational narratives in the country; the first workshop was held in Karachi on April 27-28, 2016, and the second was held in Murree on May 30-31, 2016.

Opening the debate, PIPS director Amir Rana asked teachers to explore the causes behind social disharmony and what they, as teachers, could do to end that. Clearly, one of the reasons behind radicalization is a divisive curriculum, which thrusts upon students divisions.

Some teachers argued that they are wrongly blamed for not being sensitive in their content delivery, saying that the curriculum is developed by public departments, who don’t engage teachers. 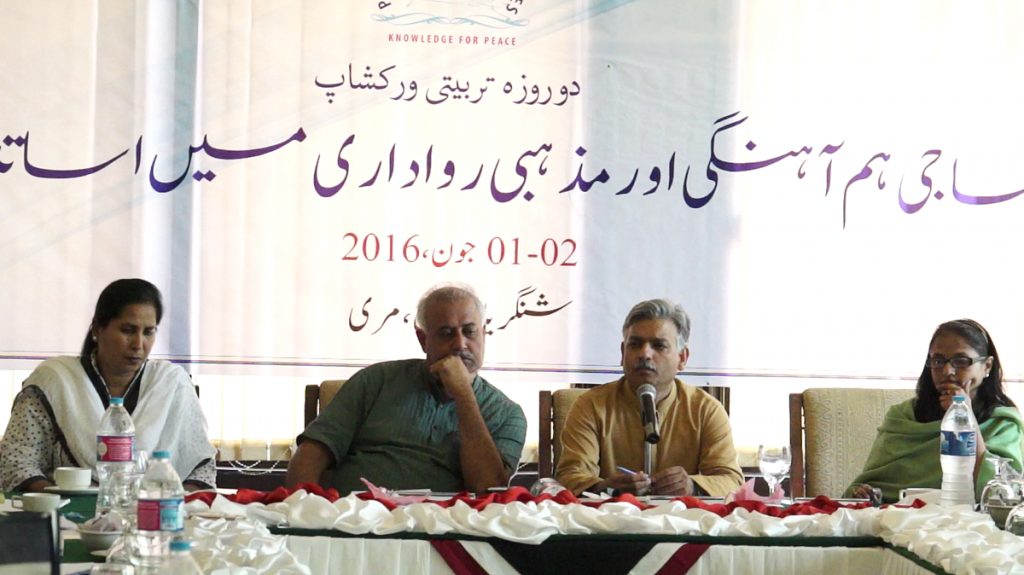 They argued if curriculum is not uniform, the challenges to harmony are inevitable. Some content, for instance, is not acceptable by members of different faiths. “Harmony is not possible”, one of them said, “if teachers and society are headed in different directions.”

But many argued that teachers are engaged in shaping curriculum, though they tend to avoid going to the meetings, which are often tedious.

Jennifer, a peace activist, shared how non-Muslims played a pivotal role in Pakistan movement, a role acknowledged by Pakistan’s founder. “The heart of Pakistan, Punjab, was included in Pakistan through the vote of a Christian – S. P. Singha”, she recalled. Non-Muslims, she said, fought against the enemies of the country. Such an inclusive history is missing in the curriculum.

Peace activist Romana Bashir argued that not only is their insensitivity in textbooks, but teachers too don’t reflect sensitivity in their teaching. Knowledge acquired beyond textbooks is not appreciated.  “A teacher should think how to address students of all faiths”, she said. 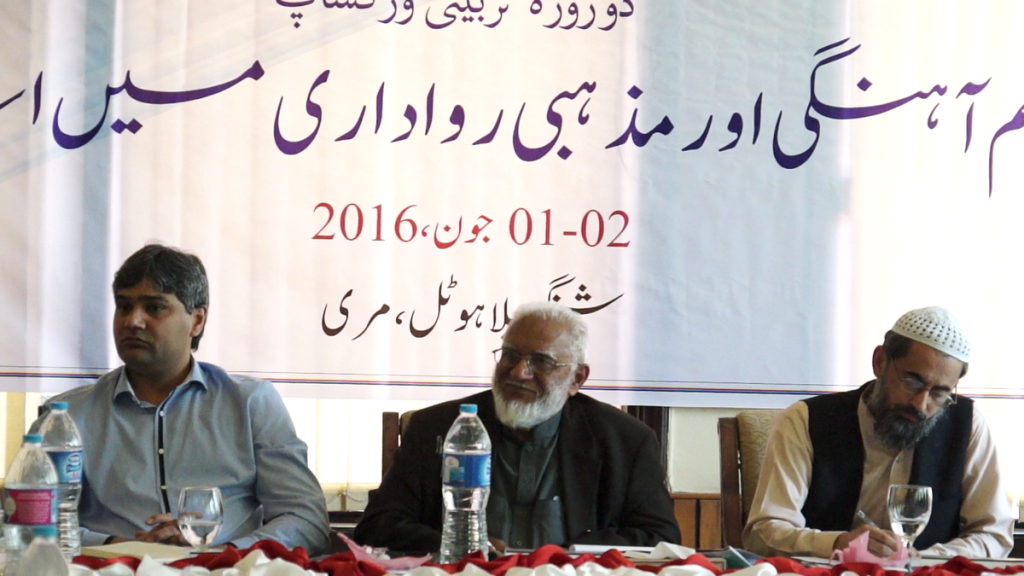 Dr. Khalid Masood, former chairman of Council of Islamic Ideology, said that because of diversity, we tend to stress upon unity, even though there is nothing wrong in that. He argued that even in Islamic tradition, diversity was upheld.

Earlier, he spoke how the state of Pakistan, in its attempt to unify people, imposed certain social symbols like Urdu language. It came as literary element, focusing more on grammar, rather than on its functional utility. The social perspective, espousing diversity of the country, was missing.

Speakers highlighted how that diversity has been benchmark of civilizational success. Scholar Ammar Khan Nasir argued that the glorious Islamic civilizations even relied on knowledge from non-Muslims; today too, some civilizations accept people from all backgrounds.

Dr. Masood called for diversity in different level of education: “Basic skills should be taught at primary level, note taking should be at middle level, and complete intellectual freedom should be granted at higher level.” It is up to the students to ask questions, to which teachers can respond, he advised.

Journalist Wusutullah Khan concurred, saying that just because something appears in paper, doesn’t imply it is correct. 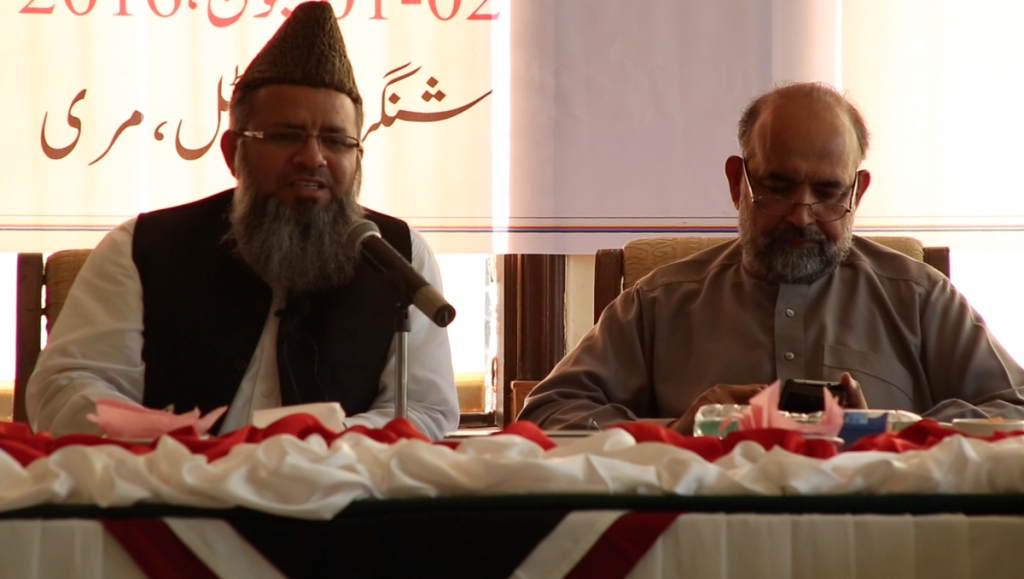 Several charged that media too highlight differences, instead of stressing upon commonalities. Scholar Raghib Naeemi said harmony is often missing on some media shows. Journalist Khan agreed, saying that those who fan up emotions are more likely to get ratings that someone offering intellectual advice.

He argued that often people say that “it is not for media role to promote harmony”. To them, he countered, “It shouldn’t be for media then to churn hate speech. Media should stay neutral.”