“To fix education system, disconnect should be bridged among teachers, students, administrators, and policy makers” 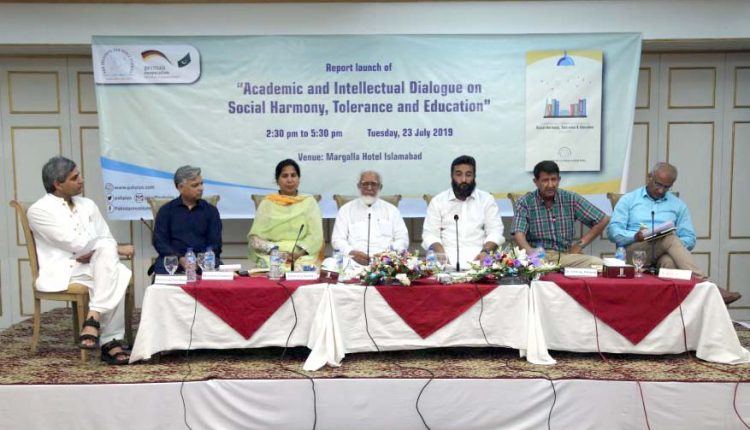 The education system in our country is in dire need of correction. There is a great disconnect between students and teachers, teachers and administrators, among teachers, and, above all, between policy makers and academia. In the end, different players are different expectations and completely different set of ideas. These should be bridged together, to fix our education system.

These came at the report launch of “Academic and Intellectual Dialogue on Social Harmony, Tolerance and Education”, a study by Pak Institute for Peace Studies (PIPS), an Islamabad-based think tank, on six dialogues held with teachers of Pakistan’s higher-secondary school and colleges from all over the country. Leading scholars and intellectuals spoke in the dialogue, which was moderated by PIPS director Muhammad Amir Rana.

Former Chairman of the Council of Islamic Ideology, Dr. Khalid Masud said when it comes to fixing education sector, there is a wide disconnect between what policy makers want and what intellectuals produce. While intellectuals want to go in detail about a problem, policymakers are more concerned about immediate, black-and-white response.

Dr. Ishtiaq Ahmed, Vice Chancellor of Sargodha University, said there is a great opportunity of positive change in the universities. He said students lack exposure; those from rural areas have not been to major urban towns, letting alone interacting with people there. Universities can provide them those opportunities to who students.

Participants said societies flourish and progress when they ask questions, but the trend of asking questions is fading. Intellectual foundations are built on probing, which is what universities should promote. However, it was asked if the culture of self-inquiry can thrive when the space for freedom to express views is shrinking.

Shahid Anwar, a teacher in a college in Rawalpindi, said Pakistan’s education system is failing at the fronts of curriculum, co-curriculum, and extra-curriculum. A key purpose of education is to enable a student read, write, and speak – something which educational institutions are unable to achieve properly. Questions are also framed in a way that instead of building a student’s analytical skills, they end up rotting answers.

Academic Dr. Aziz said that madrassah students are often mirror images of their teachers, so much so that teachers often have excessive influence in shaping students’ views. Rights activist Romana Bashir said we need to talk about acceptance of each other, rather than tolerance, which suggests reluctance.

Columnist Khursheed Nadeem said argued that despite multiple systems, each catering to different socio-economic class, at the end of the day, they are all producing same mindset. It is the mindset that is dogmatic, not receptive to diverse views. He said Pakistan’s educational system produces “degree-holders, not knowledge holder.”