AfghanistanChinaEventsIndiaPakistanRegional and global security
By PIPS Published On Dec 4, 2015 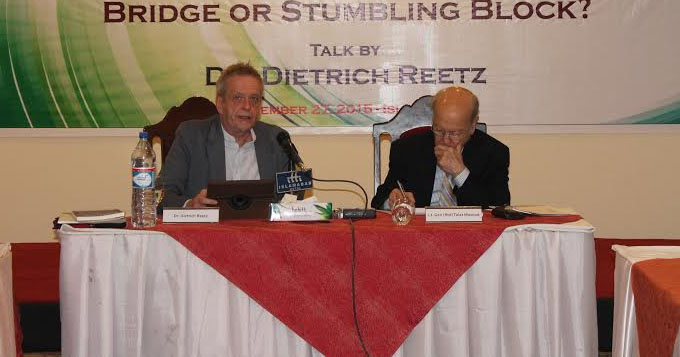 A visiting German professor Dr. Dietrich Reetz argued that the world is increasingly moving from Cold War binary to a multipolar world, which will give room to geo-economics instead of geo-politics. This phenomenal change has provided a market place for competitive projects. Pakistan should adjust its interests accordingly.

Outlining Pakistan’s presence at the crossroad of South Asia and Central Asia, Dr. Reetz shared strategic positions doesn’t automatically bring fruits. He asked Pakistan to deal with neighbors in an atmosphere of “partly cooperation and partly contestation.” He urged that Pakistan should address these challenges in a way it gains much. He underscored the changing regional scenario in this part of the South Asia, containing Afghanistan and Pakistan, pointing that the drawdown of international forces from Afghanistan has compelled countries like Iran, Russia, Pakistan, China and India to handle skillfully the possible spillovers.

“Russia is looking for regional solution, India is taking precautionary measures and are trying to strengthen its bilateral relations with Afghanistan and China is pondering over cutting its long distance but through Pakistan and even the United States will continue with relations along Pakistan”, he said, adding that it “is difficult for any country to have strained relations with its abutting country even if they have mutual enmity as if one damages his opponent in retrospect he is damaging herself too”.

On another point, he asked to assess as to whether non-state actors have paid any dividends to Pakistan. It is difficult to suppress sectarianism for some groups, and allow for others, he reasoned.

He also stressed upon the importance of cooperation among countries like Pakistan, India and United States, rather than going for competition.  “Even if can’t live together, they can’t live apart from each other too.” “The need of the hour is to have unambiguous relations among these three countries, USA, India and Pakistan, which would be essential for long and sustainable peace for this region”, Dr. Reeetz urged.

Dr. Reetz asked for matching discourse to reality: while former officials often speak of getting away from the United States, reality is that Pakistan has to rely in the Americans.

Taking part in the discussion, former ambassador Saeed Khalid vowed about the existing and long-standing thorny relations between Pakistan and India, as the former is looking for a more comprehensive package involvement with the latter. He lamented that for the past more than one and a half year, India’s attitude is not only encouraging rather very disappointing.

In reply to a question, Dr. Reetz asserted that Pakistan will benefit and would establish good relations diplomatic relations with India if it overcomes its strategic challenges. Officials from supreme judiciary, civil society activists, intellectuals and companies representative of both the countries interact with one another, on and off, since long time. These interactions, he suggested, should be channelized properly subject for overcoming strategic challenges of both countries.

When it comes to China, Dr. Reetz said, in Pakistan, the dominant theme is its special relation with China. But China wants to have equitable relation with India, too.

Dr. Reetz shared how Pakistan can tap into its “cultural or religious capital” in many countries to the west. Many bureaucrats in Afghanistan have studied in Pakistan, while the current grand mufti of Tajikistan also studied at a Pakistani university.

Meanwhile, Tajikistan’s ambassador to Pakistan, Sherali S. Jononov, said that CASA electricity project is advancing. Next year, in 2016, he said, will be the official ceremony of CASA.

Dr. Dietrich Reetz explained very comprehensively the current political climate in South and West Asia that has been shaped by hard negotiations over the conditions of the withdrawal of international forces from Afghanistan.

The talk also discussed compulsions and opportunities Pakistan can see in its relation to Central Asia, with India and Afghanistan having an eye over the emerging regional scenario from their side.