EventsPakistanWest/US
By PIPS Published On May 1, 2007 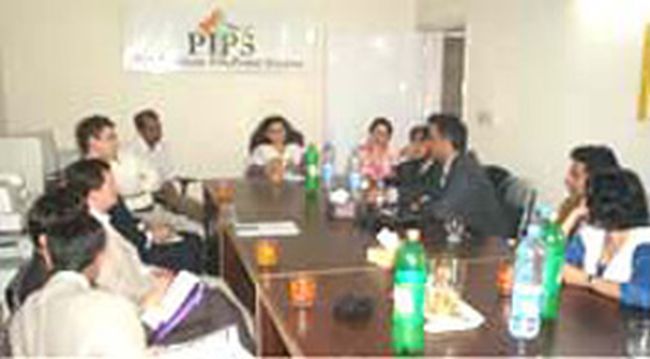 A 12-member delegation of British nationals including some British-Pakistanis visited Pak Institute for Peace Studies (PIPS) Lahore office on May 1, 2007. Their visit was a part of the ‘Projecting British Muslims’ programme, supported by the British Foreign and Commonwealth Office. The visit of the delegation was aimed at sharing their experiences as Muslims in Britain today and paving a way to constructive dialogue and debate. In his welcome address, the PIPS Director Mr. Amir Rana briefed the delegation about PIPS objectives and activities. Fatima Talib, the Research Associate at PIPS, gave presentation on British-Pakistani community Diaspora. In her presentation she shared some initial findings of this research study with the visiting delegation. Afterwards an open house discussion was initiated by Mr. Amir Rana so that both, the PIPS researchers and the visiting delegation, could develop a better understanding of the issue by exchanging their mutual ideas and experiences regarding the study. In the discussion that took place in a quite open and frank atmosphere, both sides unanimously agreed that extremism and terrorism could not be attached with any specific country, religion or sect rather it was a global phenomenon and needed to be curbed by understanding the root causes and basic factors behind it.

Led by Mathew Forman, Political Officer, British High Commission, the delegation members include Dr. Shazia Malik, an obstetrician and gynaecologist by profession and an activist in community work; Dr. Tahir Abbas, a Founding Director of Birmingham University’s Centre for the Study of Ethnicity and Culture; Mr. Jahangir Malik, UK director of the Charity Islamic Relief; Dr. Rabia Malik, a psychiatrist and an activist in the City Circle Group; Dr. Shaaz Mehboob, who has written extensively on Muslim issues and is involved with the Muslims for Secular Democracy group.

At the conclusion of the session, delegates hoped to visit PIPS again while appreciating the PIPS objectives and its research work