9/11 changed the perceptions of Americans about Pakistan 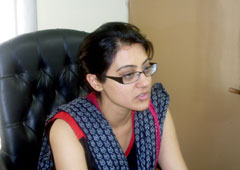 “In Pak-US relations, 9/11 serves as water shed event which changed the perceptions of many Americans towards Pakistani Diaspora in US. It not only enhanced the feelings of hatered and mistrust between the two communities but also became a strong reason for imposing restriction on Muslims’ religious freedom in US”. These were the thoughts of Miss. Rabia Zafar–a PhD student at The Fletcher School of Law and Diplomacy, Medford and an internee at Pak Institute for Peace Studies (PIPS)– while addressing a session on “Pakistani-Americans: Perceptions and Realities” at PIPS premises on 30 April 2010.

She was quoting the results of her own small scale study which noted, though, 9/11 brought an erosion of trust between Americans and Pakistanis; but situation was much better for Pakistani community in USA as compared with some European countries where racism, religious discrimination and social prejudices were much more entrenched and prevalent.

The session was followed by an inter-active question answer session. Commenting on a question what kind of role Pakistani Americans can play in removing the misgivings between Pakistan and America? She mentioned the active involvement of Pakistani Diaspora in direct US-policy making towards Pakistan can be of a bridge with a view of making their image more positive. Further, Pakistani American can also become politically more active to fill the gaps between USA and ‘Pakistani Researchers’ who are well known in Pakistan but not much recognized in USA.