Countering radicalization in Pakistan: Efforts must be initiated from within the society

It is important to challenge the extremist and literalist interpretations of Islam to prevent further radicalization in Pakistan and defeat the militant groups operating in the country.

This was the crux of a seminar organized by the Pak Institute for Peace Studies on July 16, 2010, in Islamabad.

The seminar was arranged to launch the latest edition of the organization’s quarterly journal, Conflict and Peace Studies. The journal contained the finding of a survey that was recently conducted by PIPS to study the trends and patterns of religious radicalization in Pakistan. The findings were further explained in research papers that examined the phenomenon from multiple dimensions. 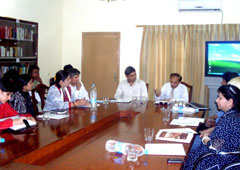 While the participants of the seminar agreed on the importance of developing counter narratives to defeat the extremist ideology, they disagreed on the strategy. Dr Maqsudul Hasan Nuri, the acting President of Islamabad Policy Research Institute who chaired the meeting, blamed the state for being negligent in this regard. But Dr Shabana Fayyaz thought that these counter narratives must be developed by the civil society, not the state. Wajahat Ali, a journalist, maintained that the state had a role to play. However, he also added that it must try to reclaim its lost credibility first. Speakers agreed that any direct involvement of the state to promote or support a particular set of thought in response to extremists’ ideology will be counter-productive and fraught with various challenges.

Commenting on the topic, Arshi Salim Hashim, Senior Research Analyst at Institute for Regional Studies opined that Pakistani state has failed to deal with the threat of radicalization on social level. She was of the view that when it comes to public perspective on extremism, it is very important in societies like ours to see the difference between religiosity and religious extremism.

Wajahat Ali stated that religiosity cannot be regarded as a manifestation of radicalization. He further elaborated that in order to formulate effective counter-strategies, it is imperative to understand the phenomenon of radicalization in Pakistani context.  The pervasive confusion over the various issues including Pakistan’s decision to support international campaign against terrorism, the U.S drone strikes in Pakistan and the issue of Jihad is manipulated by the militant groups to forward their own agenda. He observed that the average Pakistani takes his religion seriously and wants to see it in the public domain. But unlike the Taliban, he does not want to make it claustrophobic to other people. He wants to progress. But he does not want to abandon his religion.

Mr. Manzar Abbas Zaidi, Director Research at National Counter-Terrorism Authority (NACTA), presented on the issue of radicalization in a conceptual framework. While pointing towards various flaws in academic research on the issue, he said that the term “radical” does not have any negative connotation according to classic linguistic standards. However, in the context of Pakistan, it is defined as a tendency to use a peculiar brand of religion, as the justification for conquest and control over territory, populations and resources. Mr. Zaidi noted that if one has to believe that radicalization is a process, there are four stages of radicalization i.e. Pre-radicalization, Self-identification, Indoctrination and Extremism and a number of social, religious, political and economic factors influence an individual during the process of radicalization. Based on his interactions with imprisoned militants, Mr. Zaidi revealed that those people are happily settled in their thoughts and it will not be an easy task to shake extremists’ convictions. He also negated the general perception about the religious seminaries for their alleged role in promoting radicalization and militancy in society. Militant threat from Madrassa is overblown and this is validated by various researches on this subject, he noted. 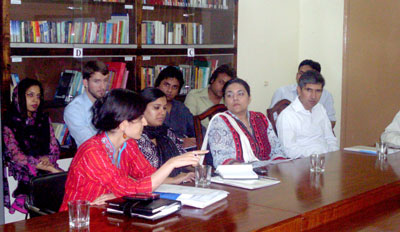 Experts’ presentations on the issue were followed by a lively QA session. Responding to a question relating to cultivating counter-narratives to extremist’s ideologies; the chairperson said that our state has been negligent to this challenge of cultivating counter-narratives. Speakers called upon the civil society organizations and intellectuals to come forward and take the lead to undo such hate ideologies. While commenting on the need for defining radicalization in local context, Director PIPS, Mr. Amir Rana asserted that PIPS has already accomplished this task through extensive research and repeated interactions with the leading national and international subject-specialists. Hence, we need to move forward to adopt some practical measures to counter this phenomenon.