Pak Institute for Peace Studies (PIPS) launched an initiative aimed at enhancing bilateral media contacts and co-operation between Afghan and Pakistani journalists and media organisation by holding Afghanistan-Pakistan Media Dialogue at Kabul on February 21-22, 2011. PIPS has partnered with The Killid Group (TKG) of Afghanistan to improve co-operation between the electronic and print media of Pakistan and Afghanistan and arrange training for journalists to improve the media’s capacity to cover complex issues with a view to enhance the qualitative/quantitative reporting on regional issues. The International Media Support (IMS) has offered financial support and training expertise for the initiative.

The media dialogue was launched by Afghan Deputy Minister of Culture and Information Mohammad Mobarez Rashedi who hailed the initiative and pledged every support. In his message read out at the media conference, Afghan President Hamid Karazai called the initiative “a great opportunity not just for the two countries but for everyone.”

On the occasion, Mr. Shahir Ahmed Zahine, chairman of The Killid Group (TKG), said the initiative aimed at fostering collaboration between journalists in the two countries with a view to raise voices for moderation and peace and to stand up against extremism. He spoke about the need for better understanding between the people of the two countries and the role that the media could play in that regard. 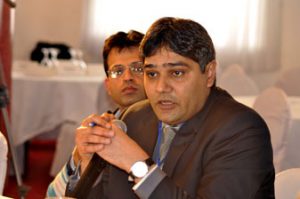 Mr. Muhammad Amir Rana, Director of Pak Institute of Peace Studies, said that the media collaboration initiative was an attempt to use influence of the print and the electronic media in the region to shape narratives of peace and develop discourses. He said that the coverage by the respective media of Afghanistan and Pakistan about the other country was confined to conflict reporting to such an extent that issues of common interest did not get any space. He said the attempt to promote and facilitate collaboration was aimed at improving coverage and understanding of Afghanistan and issues of common interest in Pakistan through bringing on board the mainstream media. Contacts and collaboration between journalists were bound to make coverage of complex regional issues more balanced and increase coverage of non-conflict issues, he added.

Finn Rasmussen of International Media Support said that dialogue really was the operative word for the initiative. This dialogue would determine the strategy of how journalists from the two countries work together on interesting and relevant stories, he said.

The first session of the media conference in Kabul focused on the need for cooperation and media’s role in that. Discussing the need for bilateral cooperation between journalists and media houses, journalists from the two countries agreed that the media had a role to play in the circumstances but journalists from the two countries had to have a joint strategy. Anything done unilaterally will not work bilaterally, they emphasised. It was stressed that media should have ownership of the cooperation and must make a conscious effort to distinguish between truth and propaganda. It was agreed that without more communication the journalists would not be able to arrive at a joint strategy. The participants said that as a first step media houses of the two countries could post their correspondents in the other country to improve coverage. The participants highlighted that media was not one entire unity in neither Afghanistan nor Pakistan. It was agreed that journalists from one country could not expect their colleagues from the other to see events and developments through the prism of Afghan or Pakistani national interest. It was acknowledged that cross-border reporting always presented challenges which were compounded by taking a nationalist view of things. It was discussed that media coverage in either country about incidents and developments in the other lacked a regional perspective and often followed stereotypes and negative images. It was noted that instead of relying on each other’s media for reporting development in the other country, the two countries learned about each other through western wire services, which often did not have enough regional perspective or failed to cater to the needs of detailed information of the people in the two countries. Emphasising the role of the media, however, the participants said that expectations should be realistic and that when all the forces in the world were struggling to achieve peace in the region there were limits to what the Pak-Afghan media could achieve. They said that the media’s job was to report the facts in public interest and leave it for the people to decide. They said that the media’s could contribute to dispel impressions developed by operating from a distance. 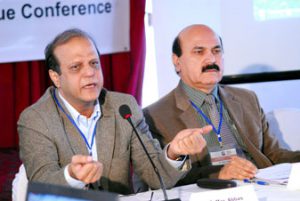 Session two of the conference discussed the specific difficulties that could create hurdles in achieving collaboration between journalists and media houses of the two countries. The need for associations of journalists in the two countries formally establishing contacts was suggested. The participants said that the conference would have made a major contribution if it could determine how the two countries’ journalists could make a common platform to make contact. The participants said that at the level of jointly covering stories, media houses in Pakistan will need to know how independent their Afghan counterparts are before committing to collaboration. A number of participants said that an independent media house would only be comfortable in seeking cooperation with another when they know each other. Knowing a media organisation’s financial health or the source of its income, be it funds from donors, would be important because the donors may not support the media house for long and a media house that is not financially independent could not be independent. The participants said that language barriers and differences in professional skill between journalists of the two countries could pose difficulties but those difficulties were not insurmountable. They said that media was playing a very important role in both countries and was an important source of new ideas on governance. Afghan journalists said that their’s was a young media as the country had never had any free media. They said even now Afghans could not be certain if official claims of commitment to freedom of media were true or were merely playing to the gallery because of presence of the international community in the country. They said that the greatest challenge to all systems in Afghanistan, including the media, was terrorism. They said that technical deficiencies could be overcome and skills enhanced but if the menace of terrorism grew stronger it would be very difficult for everyone, including the media. The visa regimes of the two countries were discussed with a view to facilitate journalists to work in the other country’s print and electronic media organizations. The need for practical resources was emphasised such as a code of guidelines detailing precise steps on covering issues in the other country to foster understanding, and developing online resources,as well as availability of contact information of journalists to allow both sides to access thematic expertise. In conclusion, the journalist agreed that the initiative should aim high and leave Kabul knowing how they will proceed.

Afghan Minister of Culture and Information Mr. Makhdoom Raheen who opened the proceedings of the conference on the second day said that Afghan doors and hearts were open for a healthy relationship with Pakistan at every level.

In session three in-depth discussion were held on challenges of security for the journalists, specifically in covering conflict stories and those with cross-border dimensions. It was considered whether the journalists were skilled to avoid or overcome threats to their safety. The session also considered ways to minimise risks. The participants said that some security challenges in Pakistan were shared and others specific. The Federally Administered Tribal Areas (FATA) were off-limits to Pakistani journalists, who also spoke about threats such as sectarian tensions and political pressures. The Afghan journalists talked about the difficulties they faced in cross-border reporting. They said that in Afghanistan there is a good law on freedom of expression but implementation had been problematic. They said security forces determined how journalists should get information. They said at times Afghan journalists were accused of having links with the Taliban, simply because they had information that the security forces did not have. Some pressure from politicians and drug mafia was also highlighted. Journalists said that they faced threats for reporting crime, religious issues, love marriages, and reporting on casualty figures or who caused those casualties. The participants said that the effect of the threats was that they felt unable to report on important issues. The participants said that some of these threats could be reduced by inculcating among the civilians the importance of media and others by the journalists respecting culture and tradition.

Session four focused on identifying measures aiming to minimise the obstacles identified in session two regarding the different levels of professional skills among journalists/media houses that agree to carry together the research/coverage of a story. It was pointed out that journalism teaching and training capacity was lacking in Afghanistan and someone needed to invest in that. Rural areas lack basic infrastructure, Internet is expansive and unreliable. The Afghan participants said the market was small and dependence on donors was there. They said although the donors did not dictate to the media organizations in terms of content, these organizations would not be able to survive if the donors stopped funding. They considered mutual arrangements between Pakistani and Afghan media houses on sharing news items, articles, photographs and video clips on each others websites, etc. and possibilities of translating and using each others reports. Some participants said that the two governments should also be encouraged to facilitate media contacts and collaboration. Journalists from the two countries also suggested ways on how stories that hold interest for people in the two countries may be researched and covered jointly. 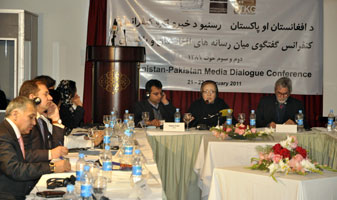 The concluding session focused on lessons learned and the way forward. The participants recognized that the Pak-Afghan media had a role to play in the region. They noted that the will to enhance collaboration existed and the challenge was how to build and channelize it so that it leads to concrete results. They said that obstacles had been identified but there was a consensus that they could be overcome and needed to be overcome in order to ensure cooperation aimed at promoting moderation and achieving regional peace. The media dialogue concluded with a joint press statement.

At the conclusion of the conference, a joint Advisory Board was selected with seven journalists from Pakistan and an equal number from Afghanistan. The 14-member Advisory Board would manage the process of implementing the initiative and will select applicants from the two countries for trainings.

The conference in Kabul was the first step in a three-year program that aims to encourage and strengthen a strong working relationship between journalists and media organizations in the two countries.

In the six-month pilot phase, the initiative focuses on joint research and publication of news reports which hold interest for audience in both countries.

Subject to successful implementation of the pilot phase, the initiative may be turned into a three-year program that will create a Cooperation Fund and training opportunities that will facilitate bilateral cooperation to cover complex cross-border issues.