Not all western intellectualism is contradictory to Islam 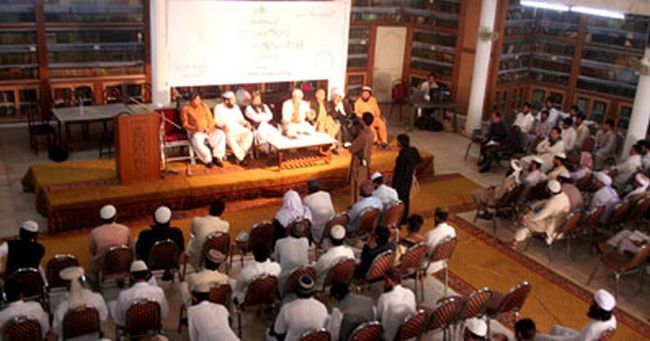 Western political thoughts and intellectual trends, which are not contradictory to basic Islamic principles, can be followed and implemented in political and state systems of Pakistan. We need knowledge-based, and not belief-based, intellectual discourses to respond to emerging local and global challenges. Intellectuals and religious scholars said in a one-day workshop with madrasa students and teachers, which was organized by Pak Institute for Peace Studies at Jamia Naeemia, Lahore on November 21. More than 150 students and teachers from different madrassas in Lahore belonging to all five madrasa boards participated.

The workshop was part of two-day PIPS activities in Lahore between November 21 and 22 to implement a range of proposals recommended by an Ulema Advisory board as part of one of its recently launched initiatives meant to engage religious scholars for promotion of peace and religious harmony in Pakistani society. The other activities included a dialogue among Ulema, or religious scholars, belonging to different schools of thoughts on Takfeer and Khurooj and an FM radio program on ‘establishment of sectarian groups in Pakistan and their impact on society’. The first round of such activities was accomplished between September 19 and 21, this year.

The training workshop meant to introduce the madrasa students and Ulema to modern intellectual trends and political thoughts in the contemporary world. This education and training exercise was the third in a series of workshops planned by the PIPS and an Ulama Advisory Board. The first two training workshops were held in Islamabad and Karachi on September 19 and October 24, respectively.

Director PIPS Muhammad Amir Rana said in his introductory remarks that the purpose of the workshop was to create awareness among madrasa students and Ulema about the contemporary Western and Muslim intellectual narratives and political thoughts and enable them to understand the challenges of the modern world and new state systems. He said this was linked to a wider goal of enhancing the role of Ulema in promotion of peace and harmony in the society as one of the key opinion makers.

Dean Faculty of Social Sciences at Punjab University Dr Khalid Zaheer delivered his lecture on ‘modern intellectual trends in the Muslim world’. He divided the modern ideological and intellectual discourses in Muslim countries into three categories; traditionalists, modernists, and non-conformists. He elaborated these discourses by describing certain individuals and movements that led such discourses in different countries. He said the traditionalist approach hindered the way of creating and accepting new knowledge and intellect in religious discourse. He emphasized the need of inquiry, research and Ijtihad to find solutions to modern challenges facing Muslims and said almost all the Islamic jurisprudents (Imams), which are followed by the traditionalists, used these techniques and differed with their predecessors over certain issues. He also highlighted the dangers of following certain biased and political interpretations of Quran and Sunnah. He noted such interpretations mostly eluded the real context of Islamic legal ruling.

Director Institute of Islamic Culture (Idara Saqafat-e-Islami) Qazi Javed discussed at length the ‘modern intellectual trends and political thoughts in Western world’.  He said civilizations not only clashed but also learned from each other in one way or the other. He explained to the madrasa students how the contemporary political concepts such as liberalism, capitalism, free market and democracy had become a fashion after collapse of communist Soviet Union. He lamented that the promises of peace, prosperity and co-existence have yet to be fulfilled by the modern capitalist system which was visible in the recent ‘Occupy Wall Street’ protests.

Director Centre for Public Policy and Governance at F.C. College Lahore Dr Saeed Shafqat delivered his lecture on ‘state institutions and good governance’. After describing different forms of government such as monarchy, oligarchy, democracy and ideology-based one, he tried to raise certain questions about the role of religion in politics and different systems of government in different Muslim countries. Regarding political system in Pakistan, he said it was important to look into these concerns: Whether people have consensus on democracy or not; what should be the role of religion, if any, in politics; if democracy can strengthen the state institutions in Pakistan; and coordinated interdependence among various social segments and their relations to the state. To a question about globalization, he said it was up to us to choose between two basic responses; either to sit at home feeling threatened by globalization or to accept it and prepare to be part of this and use it to our best benefit.

These lectures were followed a question-and-answer session. Responding to a question about clash of civilization Qazi Javed said that this assumption that all other civilizations have made an alliance against Islamic civilization should be researched academically to gather the supporting evidence. Dr Saeed Shafqat added that belief-based explanations are not acceptable in this modern world hence it is our responsibility to produce knowledge-based responses. To a question about concept of Islamic state, Amir Rana said that history of conflict in Islamic state was not based on administrative but on the perspectives of power sharing and political economy. The same challenge we currently face in Pakistan and it needs to be looked into the relevant perspectives.

Principal Jamia Naeemia Raghib Naeemi highlighted in his concluding remarks the role of dialogue, argument and wisdom in pursuing and evolving certain intellectual discourses. He said western intellectualism, which did not contradict basic Islamic principles, could be put to use in politics and state affairs of Pakistan.

The participants of debate agreed that certain individuals and groups used religious concepts of Takfeer and Khurooj to justify their violent actions. PIPS will soon publish the detailed report on all such debates in form of a booklet.