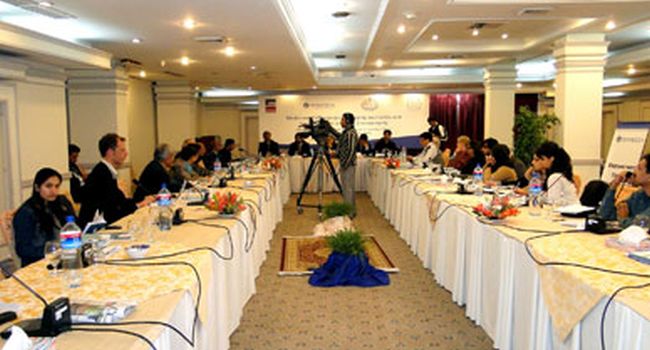 ISLAMABAD: Safety of journalists must be the top priority for media organisations as well as state institutions in order to ensure the freedom of media in Pakistan, concluded speakers at a two-day international media conference organised by Pak Institute for Peace Studies and Intermedia Pakistan in Islamabad on December 12 & 13, 2011.

The speakers at the conference, titled ‘Media and Professionalism: Keeping Journalists and Journalism Safe in Hostile Environments’, warned that in an ever competitive media industry reporters and photojournalists must remain ever cautious and avoid taking undue risks because no story was worth their life.

The conference brought together media practitioners from Pakistan and other South and South Asian countries and beyond, as well as representatives from international media watchdogs and support organizations such as International Media Support (IMS), International Federation of Journalists (IFJ) and Committee to Protect Journalists (CPJ). Among those who spoke or chaired sessions included PIPS Director Amir Rana, Intermedia Director Adnan Rehmat, Finn Rasmussen from IMS, I. A. Rehman from Human Rights Commission of Pakistan, PFUJ President Pervaiz Shaukat and journalists Cyril Almeida, Absar Alam, Iqbal Khattak, Shahzada Zulfiqar, Najam U Din, and several others. Interior Minister Rehman Malik, Federal Information Secretary Taimur Azmat and Director General of Inter Services Public Relations (ISPR) Gen Athar Abbas also attended and shared their thoughts on the threats facing journalists in Pakistan and what the government was doing and could do to mitigate those.

Amir Rana said that a secure environment was imperative for promoting freedom of media in Pakistan and it was the duty of the state, civil society and media houses to work towards providing safety to journalists. He said that impunity for the killers of journalists was an impediment to ensuring a safe environment for media practitioners.

We anticipate that the media practitioners from the region and beyond will engage in a direly needed discourse about threats to freedom of the media, expression and safety of journalists. 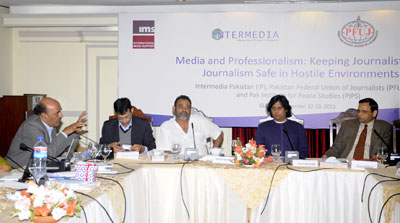 Nothing will change unless all media associations work together to improve standards of journalism in Pakistan, cautioned Adnan Rehmat, adding that Pakistan’s leading journalist association PFUJ and CPNE are hesitant when it comes to reform.

Finn Rasmussen said that proper training for journalists operating in hostile environments could contribute to minimizing risks and facilitate them in doing their work more effectively and in a safer manner.

I. A. Rehman said that journalists often become the target while reporting on a disputed issue, and suggested that media practitioners should make efforts to minimize risk in conflict zones to the maximum extent possible.
The Interior Minister announced that his ministry would establish “a special section for media to look after the interests and safety of journalists in Pakistan.” He noted that quest for breaking news was a major reason for the death of most of media practitioners who lost their lives in the performance of duty. To ensure the safety of journalists, he urged that media organisations should only send experienced and trained journalists to cover conflict zones.

The conference concluded with a joint declaration that urged reforms by PFUJ, APNS and CPNE to make safety of journalists a top priority and obligation.

It was noted that at least 76 journalists have been killed in Pakistan from 2001 to-date, while a staggering 2,000 plus have been injured, arrested or kidnapped. The participants demanded that the government should investigate the cases of all journalists killed on duty.

Other speakers at the conference, including those representing Pakistan and countries in South and Southeast Asia, said that ethical and unbiased reporting and professional journalism could help reduce risks for journalists but added that in conflict the longevity of journalists depends in no small part on how much value is attached to a journalists’ life, by the journalist himself as well as by media institutions and the state. Journalists must be trained to carry out their work safely and need to be aware of the risks involved in order for them to circumvent or avoid them. The participants noted that journalists across the world were exposed to risks because they covered issues that people did not want to become public, however, they added that absence of efforts to address and minimise those risks compounded the problems. 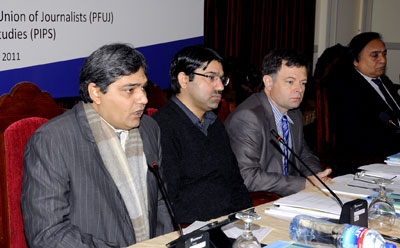 The speakers called impunity for killing journalists in the region, including in Pakistan, a particular area of concern. They expressed shock at the fact that of the 76 journalists killed in Pakistan since January 2000, the killers of only one have been brought to justice. They said that while the state had the principal obligation to protect all individuals in its jurisdiction, there was a specific need to protect journalists for no particular reason other than the fact that without their work credible information on human rights and other critical areas would simply not be available. The speakers said the state cannot absolve itself of its primary responsibility, by blaming murder of journalists on the war on terror and must show its commitment to media freedoms by protecting journalists, while noting that several journalists killed in Pakistan in recent years had been targeted outside conflict zones and the perpetrators in those killing had also enjoyed impunity to the point that it amount to virtual immunity. They emphasised that the media institutions must not only train, sensitise and give the necessary gadgets to journalists but must also abstain from pressurising them in any manner to run personal risks to gather information. In all circumstances, the reporter on the ground must be the final judge of severity of risks and his opinion must be respected. They said that in the absence of state protection and lack of institutional support, journalists must take greater responsibility for looking after themselves, even as they seek exclusive stories and move closer to the very sources and areas that at times expose them to additional threats. The conference was conducted with support from the Europe-based International Media Support under a project financed by the governments of Denmark and Norway.

The conference concluded with a joint declaration that urged reforms by PFUJ, APNS and CPNE to make safety of journalists a top priority. 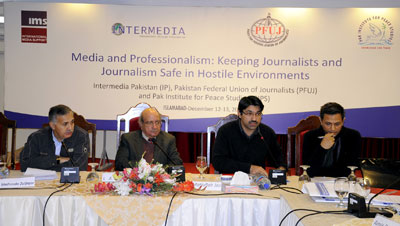