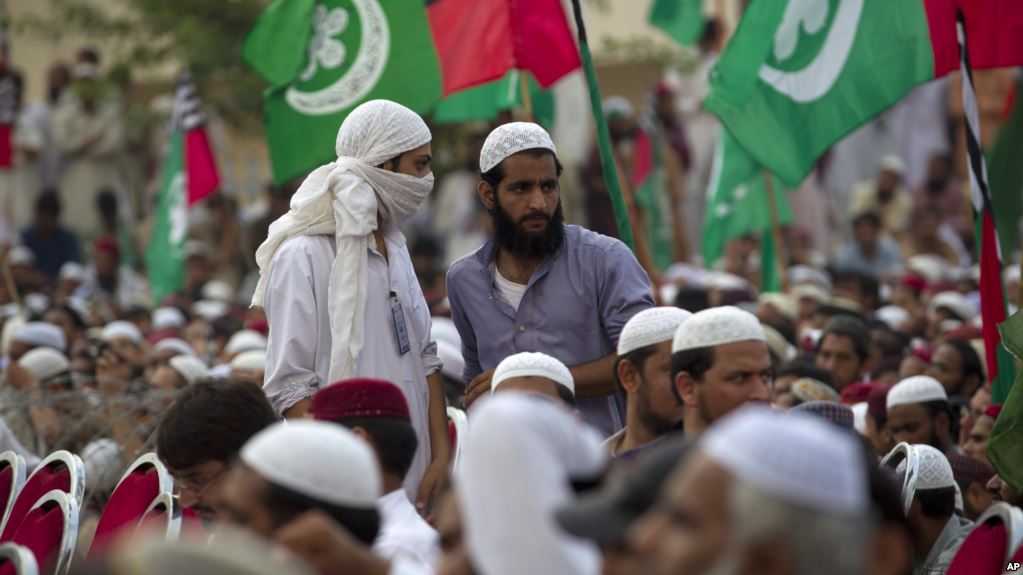 While the NAP lays down a comprehensive framework for combating the entire spectrum of the terrorist threat in Pakistan, its seventh point calls for taking steps against “re-emergence of banned militant organizations.”

Almost immediately after NAP was released in January, a spurt of activity followed. Sub committees headed by federal ministers to monitor each point of the plan, were set up, though nothing has been heard about them afterwards. On January 16th, 2015, interior minister clarified government’s intention of choking the funding sources of banned outfits along with acting against their propagation of hate ideology. These, it was meant, would prevent re-emergence of banned organizations.

In the first couple of months after the NAP was announced, provincial police carried out a number of raids against those disseminating, selling or printing material of the banned groups. Reportedly, some of their members collecting funds were also arrested.  For instance, a report submitted by Additional Advocate General of Punjab stated that Punjab’s Counter-Terrorism Department had arrested a gang of 12 people found collecting funds for Jaish-e-Muhammad and Al-Rehmat Trust, and confiscated ‘jihadi’ literature and receipt books.[1]

Reports of arrest often trickle in media. For instance, in July 2015, 13 persons were reportedly arrested in Punjab for collecting donations for banned outfits.[2]

The government insists it arrested a large number of supporters of banned outfits, recovered their printed material, and disrupted their sources of funding. According to the ministry of interior statement submitted to the Supreme Court on fourth July, a total of 60,420 individuals had been arrested in 54,376 search operations, under NAP. [3]

But overall, the government has so far been reluctant to share consolidated countrywide figures on the action taken against the banned outfits. As of today, little is known about all those arrested. Were they convicted, or as in most criminal cases, acquitted? This further dilutes the impact of the whole effort against banned organizations.

Although there is a need to have such an action on a sustained basis, one rarely hears about such raids these days.  The clampdown, however, didn’t go beyond a couple of months after NAP.

The effectiveness of the arrests the government claims is yet to be evaluated. Some banned outfits, like the Ahl-e-Sunnat Wal Jamaat, despite arrests, still carry out public meetings and protest demonstrations. These contradictions make people perceive as if the arrests were more for appearing to be doing something rather than effectively deterring members of banned militant outfits.

Hitting at terror outfits would therefore be essential in any counter-terror strategy.

The UN Security Council Resolution 1267 provides for banning militant entities and militant leaders, supporting Al Qaeda and Taliban. UN’s ban procedure has two dimensions: it maintains lists of banned entities as well as their leaders, and it monitors implementation of the ban by a dedicated body of terrorism experts.

United Kingdom and the United States also maintain similar lists, of banned organizations and specified individuals of these organizations, including those the UNSC has already banned. Both countries also have specified bodies to monitor implementation of these bans.

Inside the country, Anti-Terrorism Act (ATA) provides the legal framework for proscribing terrorist organizations as well as preventing their re-emergence in any form.

Two of its clauses are worth noting: Section 11-B of the ATA empowers the government to proscribe an organization involved in terrorism. And Section 11-EE, inserted in 2013, states that if office bearers of any banned outfit form a new outfit under a different government, the federal government may, upon suspicion, of their involvement in terrorist activities, proscribe the new outfit as well. Thus, banning a reincarnated outfit requires less evidence than an outfit for the first time.

Once an organization is banned, its infrastructure is to be sealed, activities prohibited, and members to be monitored. Thus, a banned outfit will be unable to, say, open bank account, or publish material, or hold public meetings.

People associated with the banned groups are automatically enlisted under the Fourth Schedule of the ATA. Such persons cannot move or act around easily and they are supposed to fill with the police bail bonds for good behaviour.

On ground, however, these constraints on members of banned organizations are not enforced strictly by the respective police forces. Interviews with police officers revealed that in a significant number of cases, the persons on the list have not provided the bail bonds for good behaviour as required.

Because policing is a provincial subject, each province maintains its own list of Fourth Schedulers. The provincial lists of those on Fourth Schedule be consolidate into one national list, regularly updated and be shared with all stakeholders to implement the constraints imposed by the ATA.

After the NAP was announced, the interior minister stated that a databank and monitoring network were being established for all the proscribed organizations so that “their resurgence secretly or under different names could be shut down”.[4]Outfits once banned change their name to continue operation, as discussed elsewhere in this essay. Yet, until now, nothing is heard of the database.

Rather strikingly, the government hasn’t even released list of banned outfits. Not that the list doesn’t exist; it was rather taken off from the NACTA website in January 2015, almost a month after the announcement of NAP, which is supposed to fight terrorism.[5] How can a government reluctant to publicly share the list of proscribed organizations, be expected to seriously implement the ban?

The public cannot be expected to stay away from a group they are not sure is among the banned ones. Once the list is shared, many will turn away from those on it. At the same time, more hard evidence may be publicly shared to enhance the legitimacy of the ban in the eyes of the public.

The interior ministry, responsible for enforcing ATA, in assistance from federal intelligence agencies, is expected to maintain lists of office bearers of banned organizations and share them with relevant subordinate department like arms-issuing authorities, passport office, and immigration department; and other relevant institutes like ministry of finance and State Bank of Pakistan. This way, the ministry can bar active members of banned outfits from traveling, deny them passports, revoke their arms, and withdraw them financial services.

Provincial police departments are supposed to monitor the day-to-day activities of the members of the proscribed organizations and to take legal action when necessary. Similarly, the provincial home departments are supposed to cancel the arms licenses issued to the members of proscribed organizations and ask them to deposit their weapons in the police stations. Again, having a widely-distributed list is must for these departments, like local policemen, to know whom to follow and whom to leave.

Key issues dealing with banned outfits in Pakistan have as much to do with banning them as ensuring they are not revived. That is why, NAP in specific asks for stopping the “re-emergence” of banned outfits.

In 2013, the government claims to have banned sixty organizations under the Anti-Terrorism Act.[6] Yet, even after being banned, these outfits carry out with their activities, according to a widespread perception among security analysts and ground reports of journalists.

Some groups changed their names, continuing with the same agenda. For instance, a year after Sipah-e-Sahaba Pakistan was banned in 2002, the group changed its name to Millat-e-Islamia.

Two, outfits continue to operate with the old name, in a clandestine manner; such as Sipah-e-Sahaba aka Ahl-e-Sunnat Wal Jamaat and Jaish-e-Muhammad aka Khudaam e Islam.

Ahl-e-Sunnat Wal Jamaat, continues to operate, often in public limelight, despite being banned in 2012. [7]ASWJ is considered to be a reincarnate of SSP.

Above all, some internationally proscribed organizations operate in Pakistan where they are not banned. The most pertinent cases are those of two charities, Jamaat-ud-Dawa and Falah-e-Insaniat Foundation. According to the United Nations, which has banned the two groups, they are charity fronts of the militant Lashkar-e-Taiba, already declared terrorist outfit in 2005.[8] But Pakistani officials disagree. While LeT has been banned since 2002 in Pakistan, the two charity fronts are among the “watch list” only of the proscribed outfits. Their leaders continue to make public, even media, appearance.

When asked about any possible action on JD or FIF, interior minister informed the Senate that the ban on them is unlikely.[9] Pakistani officials argue that because UN did not share with Pakistan any supporting evidence establishing JuD as LeT-repackaged, they cannot move against the new group. Should Pakistan think that the JD and FIF are unnecessarily blamed, Pakistan can take the case to the UN for a review.

But, Pakistan doesn’t appear to have approached the UN on JD and FIF. Pakistan is bound to follow the resolution. Continuous ambiguity in this regard will only isolate Pakistan from the international effort against terrorism.

The ban on propagation of the ideology of banned organization is nominally effective, if at all. A spot check of their web presence revealed that at least 20 out of the 60 banned outfits have vibrant Internet presence. These include Hizb-e-Tahrir, members of which disseminate their leaflets in the capital Islamabad, and Ahl-e-Sunnat Wal Jamaat, a sectarian group.[10]Moreover, several banned groups publish their newspapers and magazines on regular basis, including Al-Qalam by Jaish-e-Muhammad and Khilfat-e-Rashida by ASWJ.

Some banned groups also held processions and demonstrations. In February 2015, just a month after the NAP, the banned ASWJ scheduled a rally in Karachi. When the civil society protested against the gathering, the police, instead of stopping the rally, arrested the handful members of civil society.[11] Then, on February 15th, ASWJ staged protests in Islamabad and Karachi, against the targeted killings of the leaders. Islamabad’s protest was in front of the Supreme Court. No action was taken. Yet again, the group launched another protest, on March 5th, Islamabad. This time, they marched from Lal Masjid, site of the 2007 military standoff, to the Parliament House. The protestors were called off after negotiations with the city’s administration and police.[12]

These expose the weakness of the government, putting question marks over credibility in claims of taking action against banned outfits.

A nationwide approach, backed by political will, is required to keep a check on banned outfits.

There is a need to have a proper organization at the federal level to monitor the status of the ban implementation. One such organization could be National Counter-Terrorism Authority (NACTA). It should be strengthened.

To choke the funding of banned outfits, the government should educate the people against donating the groups and enhance the capacity of FIA to detect and investigate cases of terrorist financing.

As a first step, the government has to issue an official list of banned organizations, and also share evidence against these organizations or their members, with the public. Moreover, provincial lists of Fourth Schedule should be consolidated into one list, and followed upon. Those on the list should be denied, as per law, issuance of arms licenses, passports, travel abroad and key banking services besides reducing their movement. For this, the lists have to be shared with the arms licenses issuing authorities at the federal and provincial levels, passport-issuing authorities, immigration authorities, State Bank of Pakistan and all commercial banks.