Understanding the Militants’s Media in Pakistan: Outreach and impact 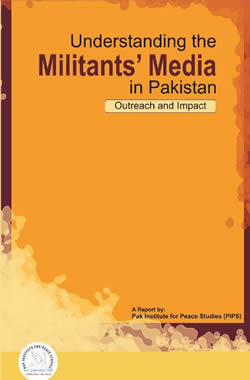 Part of the Books series:

A report by Pak Institute for Peace Studies

The book aims to map militant media, its genesis and evolution in Pakistan. Content Analysis of militant print media reveals that the use of diction, terminologies style and tone of militant media is totally different from the mainstream media. The book also discusses the impact of militants' media on the society at large. According to the findings of this research Jihadi print media has been promoting global Jihad in one way or the other. The study illustrates that Jihadi publications focused particularly on Iraq, Azerbaijan, Tajikistan, East Germany, Poland, Czechoslovakia, Romania, Bosnia, Arakan (Myanmar), Eritrea, Palestine, Sistan (Iran), China and Central Asia. Criticism of the United States, Russia and the West, calling them infidels, anti- Muslim and anti-Islam has been a regular feature of such publications. The book concludes that the militant media is gradually expanding its influence and outreach.  The book outlines a series of recommendations that can support efforts to contain militants' media in Pakistan.