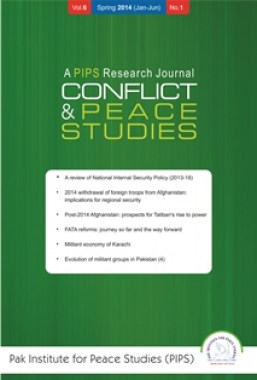 Pakistan faces an assortment of conflicts including militancy and terrorism,
expanding sectarian strife and violence, a nationalist insurgency in
Balochistan, ethno-political violence particularly in Karachi, political turmoil
in governance, and inter-state conflicts with its neighbors. There are
considerable gaps in context-specific understanding and empirical evidence
base of these and related issues in academic and policy-level research and
analysis. This not only confuses the entire discourse on conflict de-escalation
and peacebuilding but also questions the context and relevance of the policies
and interventions implemented regarding that on the level of state and
society.
Pak Institute for Peace Studies (PIPS) has been striving to fill this gap by
carrying out empirical, grounded-in-field research on the cited issues and by
disseminating its research findings and based on it policy recommendations
through this quarterly research journal. Started in the last quarter of 2008, as
many as 14 issues of the PIPS research journal have been published so far
with their primary focus on conflict, insecurity, militancy and militants’
media, religious extremism, radicalization & de-radicalizatio

Islam and politics in Pakistan (1906-1985): a political perspective
Arsalan Bilal