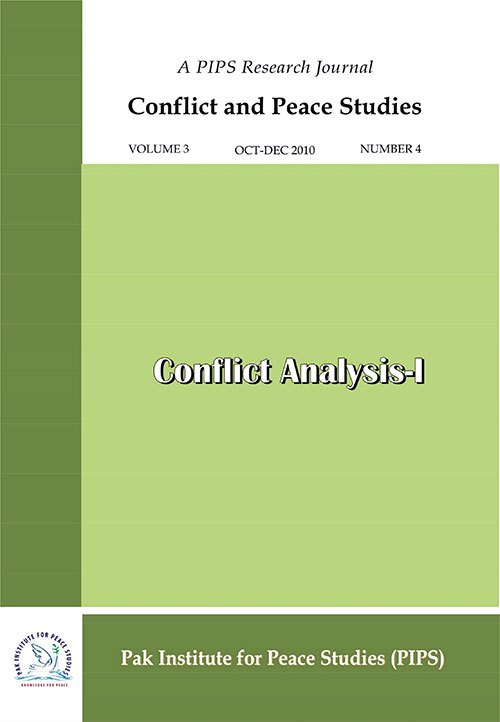 The current issue of Conflict and Peace Studies is divided into two parts. The first part carries the outcome of a recently concluded study on Balochistan by Pak Institute for Peace Studies (PIPS), whereas the second part explores the dynamics of the conflict in the Federally Administered Tribal Areas (FATA).

The PIPS report on Balochistan presents a strategic analysis of the conflict in the province, the first in-depth study of its kind, which intends to advance an understanding of the causal factors, key players and dynamics of the conflict in Balochistan, which have a direct bearing on national and regional security. The PIPS report endeavors to explore the strategies and options of programmatic and policy interventions which may be feasible and effective in reducing the risk of violence and insecurity in the province.

The second part is an attempt by PIPS to develop a better understanding of FATA. Brian R. Kerr has tried to unfold the Pashtun social structures in the context of the ongoing militancy in FATA. Syed Manzar Abbas Zaidi has endeavored to provide insight into the tribal socio-economic and sociopolitical dynamics and argues that comprehending them is as important as understanding the religious indoctrination that has prompted the tribal lashkars (raiding parties) to take on the form of a formidable army. Khuram Iqbal has looked into the potential and capabilities of the Pakistani Taliban expanding their operations beyond the tribal region. Akbar Nasir Khan argues that Pape’s thesis about the genesis of suicide terrorism, which he developed through analysis of an extensive database of suicide attacks in many countries, is not valid in the case of Pakistan and there is a need to look for other explanations for suicide attacks in the country. It is hoped that these studies will help promote a better understanding of the context and contours of the conflict in Balochistan and FATA.