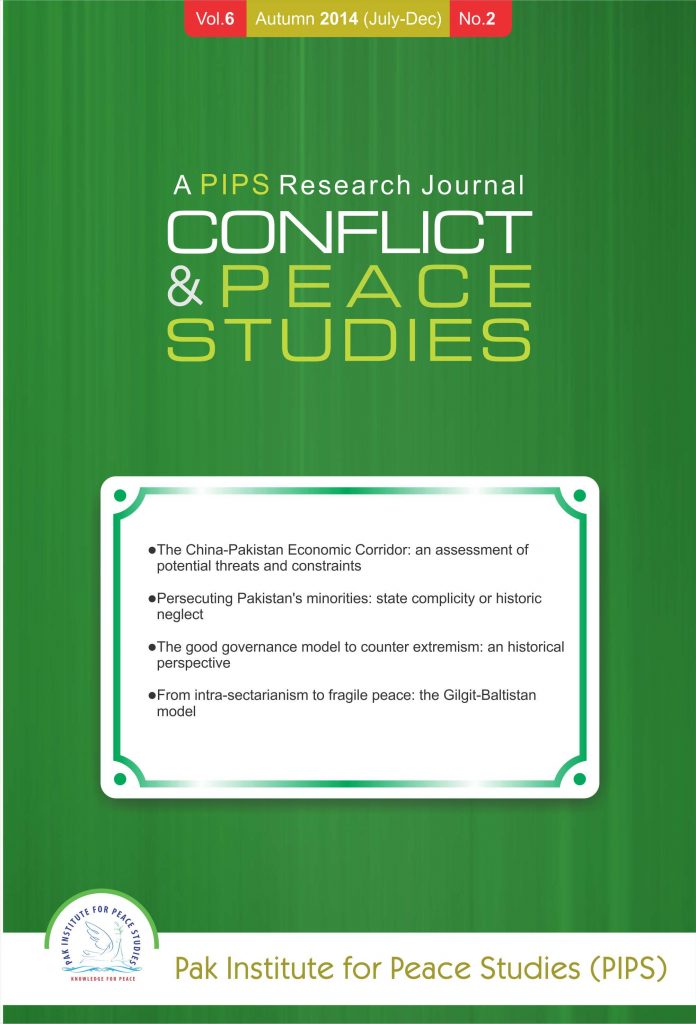 Autumn 2014 issue of PIPS research journal ‘Conflict and Peace Studies’ has been published. This is the third biannual issue of C&PS, which has been published as a quarterly publication since 2008. This issue of the journal contains four comprehensive research papers, two backgrounders and one comment. First paper, by Safdar Sial, assesses potential threats and risks that could affect the implementation of the China-Pakistan Economic corridor project in terms of insecurity and violence, internal political and economic constraints, and also global and regional geostrategic impediments. Second paper in the journal, by Razeshta Sethna, examines the socio-political views and notable challenges faced by Pakistan’s largest minority communities analyzing findings from a countrywide survey conducted by PIPS in 2014. Ummad Mazhar in his paper “The good governance model to counter extremism: an historical perspective” focuses on governance principles adopted by the Delhi Sultanate and the Mughal Empire as a way of learning from these historical attempts at curbing the spread of extremist ideologies. Fourth paper, by Peer Muhammad, discusses diverse factors, actors and dynamics of sectarian conflict in Gilgit-Baltistan. Farhan Zahid discusses the foundation of the Islamic State and its ideology since its inception and looks at factors that have fuelled its rise through the last decade. Another backgrounder, by Muhammad Amir Rana, reviews the evolution of different sectarian groups in Pakistan.