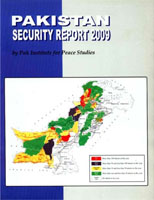 Pakistan ranked among the countries worst hit by a plethora of crises in 2009 Loss of human lives, an economic downturn, severe damage to the socio-cultural fabric in large swathes of the country, political instability and mistrust among the stakeholders of the war on terror were the key features of the year for Pakistan. Despite successful military operations in Swat and South Waziristan Agency, the ambiguity in responding to the escalating menace of terror on the policy and strategic levels while maintaining national and regional interests intact remained a challenge during the year.

Confusion still prevails in the Pakistan establishment about the “good” and the “bad” non-state actors, and about where to draw the line. This scenario resulted in another year of unrest for Pakistan in 2009. The terrorists continued strikes throughout the year, and adopted new and more deadly tactics and ventured beyond their usual targets. The 87 suicide attacks in 2009 were 32 percent higher than the previous year. These attacks claimed the lives of 1,299 persons and injured 3,633. There was an increasing sense of insecurity among the people as panic affected the daily life as well as economic activity. According to a Gallup survey, 80 percent of Pakistanis feel that visiting public places is unsafe. A PIPS study on the impact of terrorism on the behavior of the common person reveals that fear psychosis is causing atypical behavior in the society.

In the absence of a comprehensive long-term strategy, the government is mainly relying on a ‘fire fighting’ approach. The government has succeeded in re-establishing its writ in Swat and Malakand regions while the military operation in South Waziristan is also gaining ground, although the top Taliban leadership still remains at large. Though the police were able to thwart many terrorist attacks in the country, scores of ferocious attacks targeting the civilians and the security forces served as a reminder of the threat that the country faces. A significant change was observed in public opinion on the issue of terrorism and Taliban. One should be mindful of the fact that the military operations and stringent security measures are important only to tackle the immediate security threats the terrorists pose. A comprehensive, multi-layered, short and long term strategy is vital in dealing with the overall threat of terrorism. The policy should comprise of education reform, development in the conflict-hit areas on a priority basis, visible good governance, institutional building and most importantly creating an intellectual and ideological interaction within different schools of thought on various religious, social and political issues.