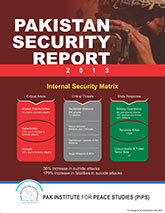 A downward trend in the number of overall incidents of violence, which had started in 2010 and continued in the two subsequent years, could not persist in 2013. It took a slight upward curve during the campaign for the 2013 general election and sustained until the year’s end.

It was expected that the government emerging out of the elections would take concrete measures to curb terrorism and other forms of violence, but 2,113 people were killed between June 4—when Prime Minister Nawaz Sharif took the oath of office—and December 31, in 1,345 incidents of violence, including 827 terrorist attacks.

Though the interior minister spoke in December of a draft being finalized, a national security policy could not be announced until the end of the year. The new government’s prime focus nevertheless remained on talks with the Pakistani Taliban. Though slight progress was made on that front, the obstinate attitude of the Pakistani Taliban, reluctance on the part of the security establishment, inept handling of the issue by the government, and eventually the killing of Tehreek-e-Taliban (TTP) chief Hakeemullah Mehsud in a US drone strike crushed the government’s dream of engaging the Taliban in a dialogue.

Meanwhile, confused and incoherent reactions by the political parties, including those sitting in the federal and provincial governments, to the death of Mehsud revealed the inherent weaknesses and absence of political will among the political leadership to confront the threat of the militancy mainly emanating from the Pakistani Taliban. Since then, the government has been using the mantra of peace talks as rhetoric and has not pursued its prime strategy of talks whole-heartedly.