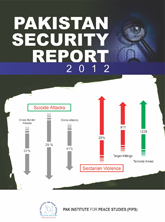 2012 was a year of mixed responses to critical security threats by both the state and society in Pakistan. A downward trend in the number of overall incidents of violence and casualties, which had started in 2010 continued in 2011 and 2012. There emerged some clarity on the institutional level in dealing with the menace of terrorism, but the assassination of Khyber Pakhtunkhwa senior minister Bashir Ahmed Bilour and the unsuccessful bid on the life of Malala Yousafzai, a young peace activist from Swat, dampened the optimism.

In order to keep the optimism intact, some institutional responses would be indispensible to deal with terrorism and addressing the rising extremism in society. The fact that the security establishment, which had been reluctant to acknowledge the growing influence of extremists in the country, had formally recognized it as a threat must be built upon. The army chief’s speech on Independence Day was encouraging as he stressed clarity on the issue of extremism and terrorism. The judiciary, which was under criticism for acquitting detained terrorists, showed the resolve to prioritize the issue. The Chief Justice of Pakistan on a number of occasions emphasized collaborative efforts to eradicate extremism from society.

Pakistan’s National Assembly passed a fair trial bill, which authorized the state to intercept private communications in order to find incriminating evidence against the terrorists. Although invasion of privacy and denial of freedoms have and should elicit strong reservations, it is promising that the use of technology and reliance for conviction on things other than torture and confessions beaten out of criminals are being considered. This could be a definite step towards strengthening prosecution of terrorists, but must go hand in hand with measures such as effective witness protection mechanisms and focusing on scientific investigation and gathering forensic evidence.