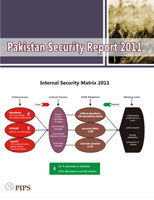 The last half of the year 2011 was a period of comparative peace in Pakistan in terms of internal armed conflict, acts of terrorism and the consequent casualties. A decrease in the number of suicide attacks and drone strikes were the major contributing factors. Although the security situation is slowly improving as violence has decreased 24 percent in the last two years, Pakistan is still among the most volatile regions in the world.

A surge in revenge attacks was expected after the death of Osama bin Laden in a US operation in Pakistan on May 2, 2011. The May 22 attack on a naval aviation base in Karachi further fuelled such apprehensions but later a decline was seen in suicide and other terrorist attacks across the country. Security analysts pointed out different factors that prevented the militants from escalating attacks. The ongoing military campaign against militants in parts of the Federally Administrative Tribal Areas (FATA), increased surveillance by law enforcement agencies and arrests of 4,219 suspected militants in 2011 were among the main factors contributing to this decrease. The killing of key militants in US drone strikes in FATA was another factor but it was less effective compared to 2010. Some security analysts also consider decentralization of the Tehrik-e-Taliban Pakistan (TTP) and talks between militants and the state as important factors in the decline in violence. Al Qaeda’s increasing concentration in Africa and the Arabian Peninsula could be another reason. The traditional hotspots of sectarian and ethno-political violence in Pakistan remained active in 2011, indicating that structural violence may persist in the years to come.

The security situation in Punjab, Kashmir and Islamabad improved considerably but violent incidents increased in the provinces of Khyber Pakhtunkhwa (KP), Balochistan and FATA in 2011. The writ of the state was partially restored in parts of FATA, but the security situation remained volatile as militants dislodged from their strongholds constantly managed to relocate to other parts of FATA. The critical challenges in Balochistan and Karachi remain unaddressed. The government is yet to evolve a workable mechanism to address the grievances of the Baloch. The political and sectarian violence in Karachi demands a comprehensive policy initiative to develop the ethno-political and sectarian equilibrium in the city.