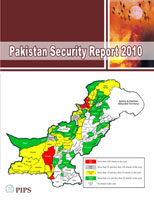 In 2010, Pakistan witnessed an 11 percent decrease in the number of incidents of violence and terrorism compared to the previous year. An effective military campaign against militants in the tribal areas, increased surveillance by law enforcement agencies and killing of key terrorists in US drone strikes in FATA were among the main factors behind this decrease. But this decrease was not uniform across the country. Violent incidents increased in the provinces of Sindh and Punjab and in Gilgit Baltistan in 2010 compared to the previous year, indicating growing urban terrorism in Pakistan. There was a considerable decrease in the number of violent attacks in Khyber Pakhtunkhwa’s (KPK) settled areas. However, although the writ of the state was partially restored in FATA, the security situation remained volatile as militants dislodged from their strongholds constantly managed to relocate to other parts of FATA. Despite the progress on the security front, sustainable peace has not been achieved in KPK and FATA due to the less than impressive performance of a weak political administration, which is beset by chronic challenges of poor governance and failure to ensure effective political participation for the people.

Rule of law is a critical element of good governance, which is lacking not only in KPK and FATA but across the country. According to World Justice Project (WJP) rule of law index 2010, Pakistan is among the countries where rule of law is sorely lacking. The latest Funds for Peace failed states index ranks Pakistan as the 10th most poorly governed state on account of poor governance as well as security indicators.