Through Each Other’s Eyes 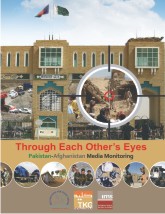 The impressive growth and vibrancy of the news media in Pakistan and Afghanistan in the last decade have been without precedence in either country’s history. The media has massively grown in Afghanistan in the past one decade, although quality and coverage have not always kept pace with the quantity. There were around 80 terrestrial TV stations, more than 175 FM radio stations and hundreds of print media publications operating in Afghanistan at the end of 2012. But most of them, particularly the private outlets, are very young and have a long way to go to acquire the required human capacity and skills in order to produce timely, balanced and comprehensive reports, particularly from the region and the neighboring countries. With the exception of FM radio stations, the number of print and electronic media organizations in Pakistan is higher than in Afghanistan. Pakistan’s print media has a long history that predates independence from Britain in 1947. The electronic news media in the private sector, both TV and radio, has only blossomed in the last decade, and already enjoys extensive coverage and sway. Because of the commonalities between the two nations as well as the shared main challenges faced by the media in both countries, Afghan and Pakistani media have started limited cooperation in various forms, an example being joint debates recently organized by an Afghan and a Pakistani TV channel. However, the cooperation and sharing of experience between the media in both countries is still far from what one might expect from two neighbors who have shared cultural and religious values and who are so completely dependent on each other for peace and prosperity. In recent years, there has been growing appreciation for the need for cooperation between journalists in the two countries that can help promote better understanding between the people on both sides of the border.