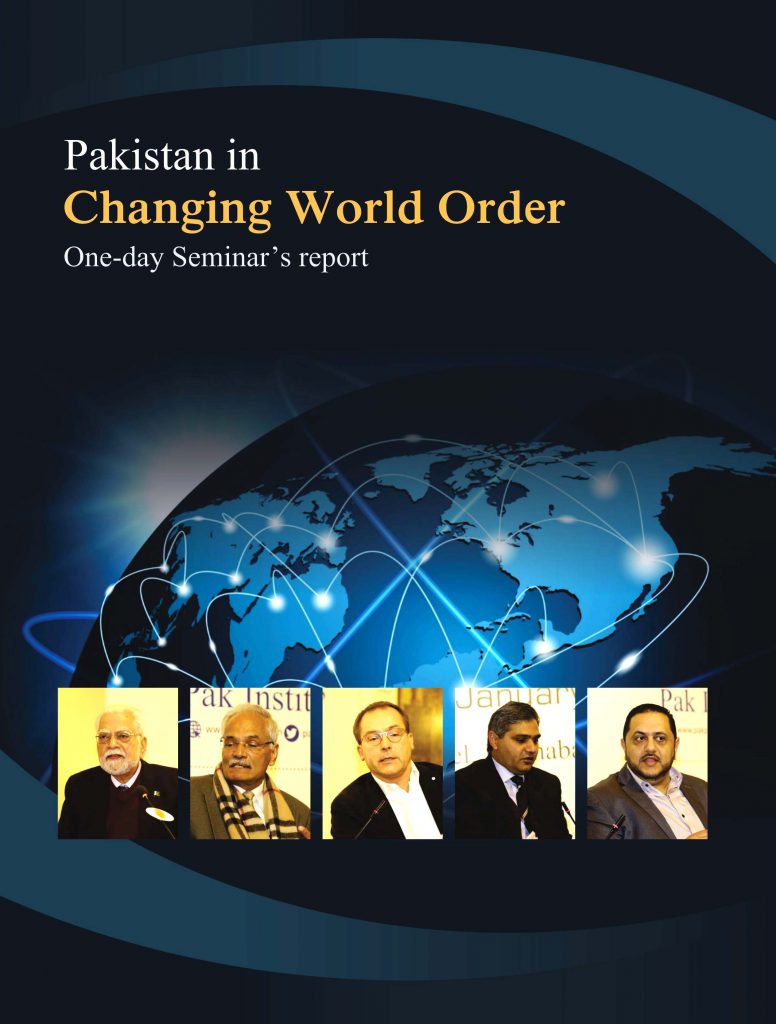 Pakistan can benefit from the changing world order, once it puts its own house in order. At the same time, it needs to rid of the binary thinking that being one’s ally means being someone else’s enemy.

These views were expressed in the daylong seminar on “Pakistan in Changing World”, held on January 21, 2019 in Islamabad. International and national experts spoke on the occasion.

The seminar noted that the world is changing: US’s global posture, if not power, is changing; China is rising; the Middle East is in throes of violence fueled by regional rivalries; terrorism still is a potent threat. All these and many other developments are affecting Pakistan.

As discussed, China’s rise and what it means for US is over speculated . Will there be cooperation or outright conflict, or something in between? While some are not ready to lend cooperation on global issues, the current administration in the US, it is said views China as more of a strategic rival.

In Pakistan, there is a tendency of viewing US-China competition as inevitable. Even Pakistan’s own diplomatic struggles or India’s closeness with US, is traced to the latter’s outdoing China. But one strong view warns against falling too much for a Cold-War binary  thinking.

Yet, Pakistan’s alignment with China, manifested in the shape of China-Pakistan Economic Corridor (CPEC), is credited for opening diplomatic and economic space for Pakistan beyond its existing options. At the same time, Pakistan should not let go of its ties with the US. Those ties have their own history and should not even be linked to US’s relations with India.

Regionally, the rivalry between Middle Eastern countries, in particular, Iran and Saudi Arabia, can limit Pakistan’s choices, forcing it to choose one over another. How Pakistan manages that is yet to be seen. Pakistan’s key concern, it was noted, is the potential export of terrorist ideologies by groups like Daish, which presents an ideology calling for establishing an Islamic State.

On a positive note, many terrorist groups in the country are on the run. This, some say, can provide space for Pakistan to move ahead.

While Pakistan can do little in changing the world around, it can mitigate its negative effects with foresight, by taking benefit from competing players.

Pakistan’s inability to play to the fullest emanates from the economic difficulties it faces, coupled with a sense of insecurity dodging it for the last ten years.

As the world becomes multipolar, so would the discourse be, with reference to power politics dominating it at the behest of human rights. Yet connectivity too seems to be the way forward, which China has been propounding.

Published: May 17, 2019
Publisher: Pak Institute For Peace Studies (PIPS)
0
61 FacebookTwitterGoogle+WhatsAppEmail
You might also like More from author
SouthAsiaNet